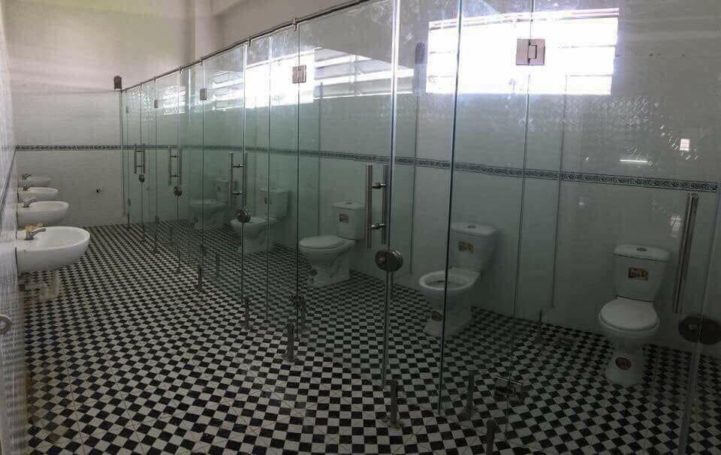 How is it possible that the weekend is over already? I’m back in that mode where I start to get depressed about it on Sunday, and that’s not good, my friends. Toney always says, “You have 24 more hours!” In other words, stop yer bitching and enjoy what you gots. Or something similar. But last week was only four days, and it felt like eleven. The shortened weeks are often more painful than the normal ones for some reason. And once I’m finally clear, the weekend goes by faster than a Miller Genuine Draft dump. Ugh.

But the weather is better. At least I have that to cling to. Last week was hot and humid and utterly demoralizing. And now it’s like fall again. Love it! Speaking of hot and humid, I asked the younglings to put all the Soviet humboxes in the windows while I was at work last week. (More outsourcing!) But Toney and the younger boy have some kind of imagined problem with the big honkin’ living room air conditioner. They’ve convinced themselves it has mold in it. “We’re all going to get Legionnaires Disease,” the boy assured me. “Well, spray it out!” I shouted. But Toney tells me the unit is probably 12 years old, or maybe older, and needs to be replaced. We’re now at a place where they’ll believe the thing is a health hazard no matter what. So, I’m picking my battles, and I guess we’re going to buy a new one. I’m not sure why that one’s a problem and the bedroom units are not, but whatever. I know better than to bring it up, or we’ll be replacing those too.

In any case, we looked at them over the weekend and it’s amazing how small they are now. The one we’ve been using is so heavy it takes two people to carry it. And it’s super-loud. You’ve got to turn the TV up to 52 or something to hear it. Ha. I bet the new ones are a lot quieter too. So, maybe it’ll be a blessing in disguise? However, the one we zeroed in on (at Sam’s) is temporarily out of stock. The overzealous air conditioner concierge there assured us they’ll have a new shipment later in the week. I’m skeptical, of course. ‘Cause I assume most people don’t really know what they’re talking about. But we’ll see.

I did tell everyone that if this thing drags out though, and the ass-sweat weather returns, the mold box is going back in. Replace it, or it’s back to Spore City, baby! That’s the mandate.

The older boy is going to see Jack White this week, in Rochester. He’s going with a friend and staying overnight. So… I’ll be stressing about that situation until they return. There’s a certain level o’ knucklehead there, which doesn’t exactly give me a warm ‘n’ fuzzy feeling. Ya know? And on Sunday both boys and I are going to Philadelphia to see the Eels. We’re meeting Steve and his wife there. Should be fun. Early reports from the tour seem to indicate the band is in rockin’ mode. You never know what you’re going to get from them, but it appears they’re just stripping it down and cranking it up this year. My favorite kind of Eels show! I want to see a band called Wussy in July, but the details haven’t been worked out yet. The younger boy would be a perfect companion, but it’s a 21 and over show. I’m gonna have to lobby Steve to go with me. Stay tuned.

Do you have any concerts lined up for the summer? Tell us about ’em, won’t you?

And speaking of Steve, he recently gave me a bottle of Mickey’s Big Mouth. He said it would transport me back to 1980 when we used to drink that swill in an unreasonable quantity. I put it in the downstairs fridge and it stayed there for a couple of weeks. And when I finally cracked the seal on that bastard a familiar funk rushed out and I was indeed transported. It has a distinctive smell that I hadn’t experienced in 30 years or more. Crazy! But the beer itself? Horrendous. Most of that cheap garbage just goes down like water, but Mickey’s is aggressively bad. Oh, it puts up a fight. Heh.

Do any of you remember the weird old razor-sharp lids Mickey’s used to use on their big mouth bottles? Being shitfaced on cheap malt liquor and monkeying around with a lid that turns into a blade the moment you open it? Ahhh, those were the days. I think I still have a few hand scars as a result of various Mickey’s Mishaps. Today it’s just a normal twist-off lid. Too bad.

Tomorrow I’m going to record another episode of my “podcast.” Believe it or not, I’m looking forward to it. I think the first one was certainly bad but not as bad as I’d feared. It’s still early days, but I’m having fun with it. I was caught off-guard by my fairly pronounced accent, though. I knew I had a light dusting of it, but it’s more than a dusting. But tomorrow I’m doing it again and sending it off to the producer dude. I’ll post it on Friday, and make it available to everyone. The first three will be available to everyone, and starting at number four it’ll become a “thank you” to the folks who support me at Patreon. As I type this there are twelve of you. Much appreciated! That’ll be a small podcast audience if it doesn’t increase before then. But I don’t care. I’m keeping it going!

By the way, Patreon allows you to hide the total dollar amount pledged, and the number of patrons in each category. But I ain’t hiding anything. I’m running it wide-open. No hiding. If you’d like to support my dubious efforts, I’d be much obliged. Go for the $4 or more per month plan, and you’ll have access to the weekly audio. It’s going to get better. I’m somewhat sure of it. Here’s your link.

And I need to start winding this thing down. For a Question I’d like to know about the things you’re currently enjoying. I’ll give you my list, and hope you’ll do the same in the comments. My list: the “podcast,” the Cincinnati Reds (even though they’re having a terrible year), the entire Wussy catalog (greatness!), the final season of The Americans, and the crazy-ass second season of 13 Reasons Why. Also The Best Show, my current favorite podcast. I’ve been listening to it off and on for years, but I’m currently locked-in. It really is the best show.

What about you? What are you currently enjoying? Tell us about it, won’t you?

And I’m calling it a day. Don’t forget to check out the new site, Explanations for Aliens, if you haven’t already. I’m proud of some of that stuff.