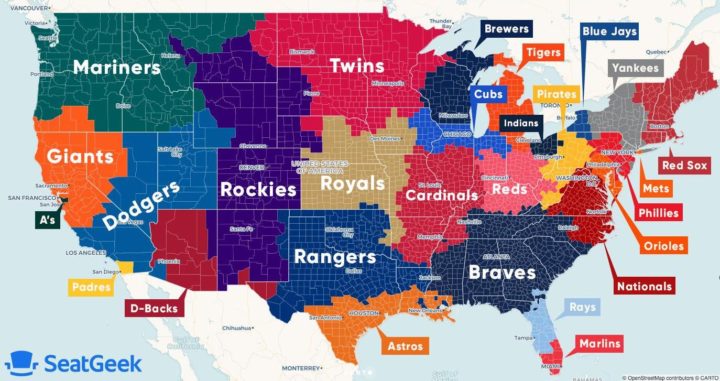 I posted the above graphic on Facebook a few days ago, but find it interesting so I’m posting it here too. It’s supposedly baseball territory, where fans for each team live. So, the Angels and White Sox have no fans? I’m unclear. How accurate is this thing? All I know is… the Reds info seems relatively correct. What are your thoughts?

It snowed here last night, the first snow o’ the season. It’s not much, but it’s enough to cause some elevated profanity production. There’s reportedly a thick layer of ice underneath it, too. I haven’t been out there but both of the boys were bitchin’. …I’m not ready for this crap. Oh well. According to this website, spring training starts in 91 days. That seems like both a long time and right around the corner. How is that possible?

Two nights ago I was in bed, around 12:45, reading. And I heard a very loud roar approaching from far away. It got louder and louder, and whatever it was zipped right over our house, super-loud. It sounded like a big-ass military helicopter, and that shit was moving. The next morning I asked everyone if they’d heard it and they all said no, and were also not interested in discussing it further. But you don’t understand, I shouted, it was really loud and low! The shrugs of emphatic disinterest annoyed me. Why does nobody care?! The younger boy told me it was probably a drone. It shook the house, I hollered. It was no drone, it was a helicopter. Or an extraterrestrial ship of some sort, from a disappointing galaxy where they haven’t figured out how to make their shit silent yet. At that point, he disengaged and made it clear he was only humoring me. Highly unsatisfactory.

Another mystery… Toney and I went out for a couple of beers this past weekend, to a place near us called Tully’s. They have a decent beer selection and really good appetizers ‘n’ stuff. They also fill growlers for a good price, so I took one along. Everything was fine at the restaurant, we had a good time, etc. But when we got home and started drinking the beer from the growler it felt like we were instantly semi-drunk. Indeed, Toney went to bed early because she said she didn’t feel well. And I was quickly heading into “hammered” territory too. WTF? It was just some IPA, with a listed alcohol content of something like 6.5%. Nothing that should launch two seasoned beer drinkers into a state of insta-smashed. We had two beers each at the restaurant, nothing crazy. But once we started drinking the growler beer everything went wonky on us. The weird thing? It was something called Great Lakes New American IPA. And I can find no evidence that it even exists in this world. I did some Google searches and checked out Beer Advocate, as well as the Great Lakes Brewing website. There’s nothing called New American IPA that I could find. What in the pimple popping hell is going on here? What did we drink? It was tasty, whatever it was.

I posted a new episode of the podcast late last night. Here’s the description: In this one, I tell you about the days before cable TV and the crazy exhilarating world that emerged once cable took hold. I go into detail about two early cable channels (and their unforgettable ads) that meant a great deal to a young up-and-coming Jeff Kay. Then I share a great hotline message from Ian in Scotland. I hope you enjoy it. Thanks for listening! And here’s the fancy-ass player, or you can grab it wherever you get your podcasts.

I’m supposed to go to Cooperstown on Friday, with Steve. Hopefully, there won’t be any weather issues. Right now it looks good… We’re planning to visit the Baseball Hall of Fame again. We used to go yearly, but have gotten out of the habit. I’m pushing to get it started up again. If we go (sausage fingers crossed) I’ll be posting many a photo to Instagram. Follow me if you ain’t.

And I need to call it a day here. For a Question, I’d like to know whether or not you wear a watch. I don’t and never have. If you do, how many watches do you own? How does this whole watch-wearing culture work? Do you have to have many and switch them out? Or is it just one watch used daily? I don’t personally require a clock strapped to my person at all times, but I believe I’m in the minority. What do you have on this mysterious, murky subject? Tell us about it in the comments.