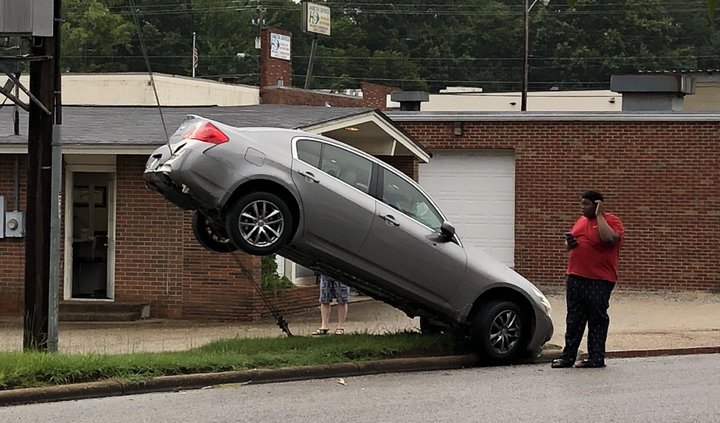 Yesterday was the first day o’ the month, which means it was time to file a new field report at Explanations for Aliens. And here it is. This time I attempted to explain classic rock radio to visitors from another galaxy. Please let me know how I did with it.

I hate to talk about the weather all the time, but what the hell’s going on?! Is the Earth now hurtling end over end into the sun? This is utter bullshit. Toney was at Walmart this morning, and walked past a parked and not-running SUV in a handicapped spot, with two giant, barking golden retrievers locked inside. It’s literally the hottest day of the year! So, she and another woman called the cops.

An officer arrived a few minutes later but didn’t really do anything. She just stood there and waited for the asshole owner of the vehicle to return, and checked on the dogs. No ticket, no nothing. Grrr… I wish she’d knocked out the windshield, or cut the entire top off the vehicle with the Jaws of Life. Then roughed up the owner before hauling him off to the sodomy-slammer. Highly unsatisfying… People are the worst.

I just helped Toney carry in groceries from the car and it’s like the Sudan out there. Who could lock-up two smiley dogs in a car on a day like this?? Whatever. I’m sure it was all a big misunderstanding.

Last night we had steaks on the grill, and something went askew. They were big NY strips from Sam’s Club, relatively expensive (to me, anyway), and I nearly burned ’em down to a wafer of ash. I turned on the grill at nearly its lowest setting, put the four steaks on, and retreated to the air conditioning. And when I went out to check on them a few minutes later I audibly gasped. The entire grill was on fire! Flames were shooting out from underneath the lid on all four sides. What in the manscaping hell?? It’s a wonder the entire deck didn’t catch on fire.

I ran over to “the situation,” and noticed the temperature gauge was completely pegged: the shit was like Chernobyl! I opened the grill, threw the steaks onto the higher shelf to get them off the direct heat, turned everything off and left the lid open until the fire stopped. And the steaks were OK. I finished cooking them a little later, and they turned out reasonably well. There was definitely a solid char on those bad-boys, but they were fine. If I’d waited two more minutes though… We’d probably be on the phone right now with State Farm, from our temporary housing at the Red Roof Inn, checking on our options.

I don’t know what happened. Maybe burger grease built up in the bottom? Not sure. But it was craziness. We’re lucky the propane tank didn’t explode. They’d be grafting ass skin to my face this morning. The good news: there’s plenty of it.

I got a late start on this one, so I’m going to have to cut it short. I’ll leave you now with a very simple Question: what’s the best soda in your opinion? Or pop, or whatever the hell you call it where you are? I’m gonna go with Dr. Pepper. I also like Mountain Dew. It’s smooth and has a caffeine kick. But if I had to choose just one, I’d have to go with the Dr. What’s your opinion on this important issue? Tell us about it in the comments.

And on a semi-related note, I talked about the weirdest beer I’ve ever encountered in the latest podcast episode. Can you beat cantaloupe and black sea salt? WTS?? Have you tried a beer that’s weirder than that? There’s a lot of strange offerings out there these days. So, if you have anything on that subject… I’d love to know about it as well.