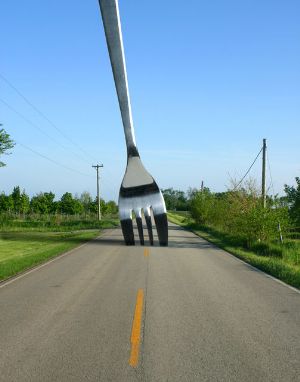 My alarm clock is like some nagging school teacher, or ex-girlfriend, or something along those lines.  This morning it started screeching at me to get up, and I politely informed it I would be getting out of bed soon, but not right now.

So, she left me alone for just a few short minutes, but was soon yelling again.  In a really annoying, Wanda from Fairly Oddparents voice:  “Get up!!  Get up!!  Get up!!!”  Holy shit, man.  Leave me alone!  Get off my goddamn back.

She went away, following my outburst, but was right back in there five minutes later:  “Get up!! Get up!!”  The sound of her voice just goes straight through my brain stem…  Goddammit!  I’m trying to get a few extra minutes of shut-eye.  Is that too much to ask??  Holy fuck.

And it just kept happening, over and over again.  She’s the most annoying and relentless bitch of an inanimate object I’ve ever encountered.  God, I hate her so much.

I think it’s safely autumn, right?  I believe it’s time to yank all the Soviet humbox window air conditioners, and take them to the basement.  It’s a gigantic pain in the sensitives, but I like the taking out much better than the putting in.

When I’m installing all five of those ridiculous contraptions, it’s usually 90 degrees in our house, with 92% humidity.  And I know I’m looking straight down the barrel of three or four months of nasty heat and a crack that’s perpetually awash in perspiration.

But when I’m removing the humboxes, there’s fall in the air and the leaves are blowing around.  Bourbon season is right around the corner, and all is right with the world.

So, while I certainly don’t look forward to lugging those bastards to the basement, it could be worse.  I’ll try to remind myself of this fact, when I step on one of the plugs with my bare foot, and almost go cascading down the stairs with a 100 lb. aluminum box in my hands.  Yes, it’s a twice-a-year tradition…

Another thing that annoys me, which I’ve recently started noticing: people who describe things with the word “bad.”  I’ve seized on this now, and can’t ignore it.  It bothers me, every time.

You know what I mean, right?  Over the past few years people like to put “bad” at the front of their descriptions.  “…like a bad ’70s sitcom,” or “…a bad Ramada Inn lounge singer,” or “…a really bad comb-over.”  Everything’s “bad” all of a sudden, and I don’t care for it.

Also, I’ve written about this before, but feel like doing it again…  Many young people believe that anything old is automatically from the ’70s.  Have you noticed this?  If they see a Hitchcock movie from 1956, or whatever, they’ll tell their friends it was an old ’70s flick.  Or if they go into a building or office that’s a throwback to World War II, they’ll claim it’s “straight out of the ’70s.”  Why always the ’70s?  And why the sudden overuse of bad?  It bugs me.

I was recently telling someone at work about how I was offered a job by the FBI, during a previous lifetime.  You can read about it here.  And I started wondering how different my life would be, if I’d gone to Washington, DC, and taken them up on their offer.

It was one of those big ol’ forks in the road a person encounters several times during their life.  It’s safe to say my current life would not exist, and I’d be either dead, or living in some other, completely different world.  I wish there was a way to use computer forecasting software, or something, to see how it would have played out.

I don’t regret it, mind you, I’m just curious.  I mean, I have no interest in law enforcement.  No passion for it, whatsoever.  So, no regrets on the FBI front.  It’s just freaky to think about how that one decision completely influenced the rest of my life.  For good or bad, who knows?

What clearly defined forks in the road have you encountered through your life?  Are you happy with how you handled it?  What do you think would have happened if you’d taken the alternate route?  Please tell us about it in the comments section, won’t you?  I think this could be an interesting topic.