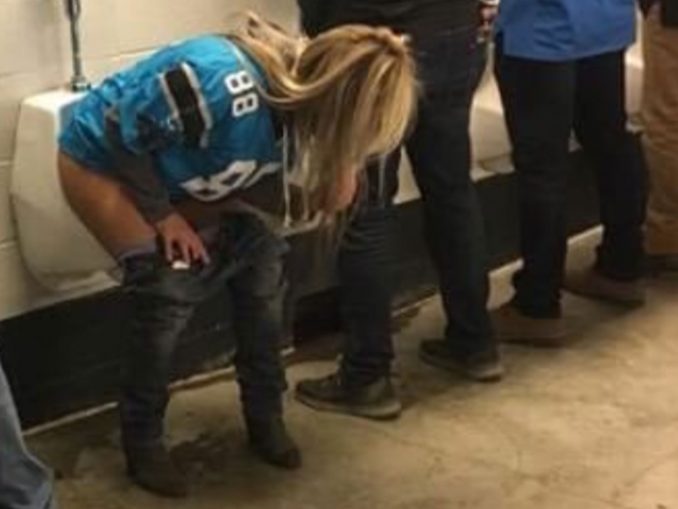 Is this picture newsworthy? It was reportedly snapped at the Carolina Panthers game yesterday, and I’ve seen it two or three times around the internet already. As if it’s an unheard of turn of events. I suppose her methods are a bit audacious, but it’s not unusual for drunken women to be in the men’s room at events such as this one. The ladies room is, from what I understand, nothing but urination gridlock. Who can blame these undocumented pissers for crossing the border in search of a better life? Right?

So, I don’t find this photo to be super-surprising. Except for one thing… it appears she’s touching the porcelain. THAT gives me a full-body shiver. In fact, it appears she’s attempting to throw a complete seal on it. Great God Almighty. There’s probably so much residue, of various sorts… It’s nothing short of upsetting.

Also, if you’re going to use the men’s room, you’re going to have to follow protocol and just stare straight ahead. You can’t have your head on a swivel like that. Oh well.

What are your thoughts on this? Why is it all over the web? Just the backing-up method? That’s what has captured everybody’s imagination? First time I saw it I didn’t react at all. It barely registered. But then I started seeing it again and again like people were amazed. And that’s the part that intrigues me. Help me out, won’t you? Also, do you have any ladies in the men’s room stories or vice versa? If so, please share.

Apparently, I wasn’t chosen for that modeling job I applied for. Also upsetting… I thought for sure they’d hire me under the “exotic” heading. Exotic, in this case, being fat and old and far from memorable. I’m thinking about filing a lawsuit. I feel like my civil rights have been violated.

Also, I fell on my ass this weekend. I mean, a full-on wipeout. I exploded my left knee (still hurts) and wallowed in mud and shouted profanity in front of my house. It was quite a scene. I talk about it in the new podcast episode, if you wanna get the details on it. Listen here. I don’t fall down very often, but I made an exception this weekend. Now I’ve got a Mickey Mantle knee. Fantastic. Here’s the episode summary:

I was taking the trash out this weekend when things suddenly took a dark turn. In this one, you’ll get all the details, along with the normal lineup of barely-related jags. Then I tell you about the home plate-shaped hole in the middle of my heart, and I reveal the Totally Out Of Context Quote Of The Week. I hope you enjoy it. Thanks for listening! 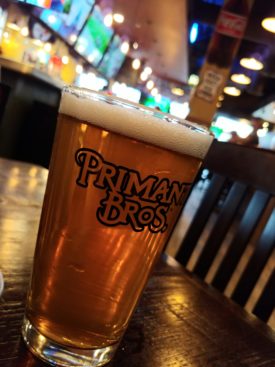 On Sunday Toney and I were out and about, and she suggested we stop at Primanti Bros. for a beer and an appetizer. It’s generally a good time. They have something called fully-loaded tater tots that speaks to my white trash roots. Good stuff! And they have a lot of interesting beers too, so it’s a great option. However… it didn’t work out for us yesterday.

When we walked in there was nobody at the host station, and the place was full of inebriated people watching various football games and shouting. We stood there waiting, and nobody came. Plenty of employees saw us but did nothing to help. Finally, about five seconds before a fukkit was triggered, some guy came over and told us to follow him. No “sorry for your wait” or anything of the sort. Just “follow me.” Grrr…

He put us in a booth way off in the corner. The thing was apparently designed for children of the 1940s and the table was digging into my prodigious gut. It took a long time for a waitress to finally appear, and she was nothing if not surly. I told her I wanted to move to a different table, and she reluctantly allowed us to do so. Then she said, “What are you drinking?” I asked if there’s a beer list, and she said no. “We’re transitioning to a whole new lineup,” she said, which didn’t help us in the least. Toney took a stab at it and tried to order a Sierra Nevada. “We don’t have that,” we were informed. What kind of bullshit? She didn’t offer any suggestions or warmth whatsoever. “Dogfish Head?” I offered. “Big ones?” she asked. WTF?

We decided to go with the normal pints, and when ol’ Sally McSurlington FINALLY brought them to us, I thought the worst had passed. I was, however, wrong. I snapped this photo, and posted it to Instagram. I was so optimistic at that point…

As we sipped our beers and waited for somebody (anybody!) to come take our food orders, that same dude attempted to pawn off that ludicrous booth to other people who didn’t want to sit there either. I saw him and a waitress roll their eyes at each other because three women wanted to move somewhere else. So, the waitstaff was unfriendly and openly mocking and ridiculing the clientele at this point. Also, the beer tasted old and semi-skunked.

We ordered chips and queso, and that was good. Very good, in fact. And eventually, a new waitress started helping us for some reason. She was nice. No problems with her. I guess the original woman washed her hands of us? She was still there, so who knows? I viewed it as a win. That first one was headed for a 40 cent tip, at best.

Then somebody went into one of the bathrooms, which were RIGHT THERE, took a three-alarm dump, and the stench began wafting deep into the restaurant. “Are you kidding me??” I was shouting. I couldn’t believe it. Still can’t. Chips… queso… skunked beer… and the essence of a recent and extremely pungent bowel movement. It was magic!

So, there you go. That last part was out of their control, I guess. But the rest of it wasn’t. Not sure if we’ll be returning any time soon. The way the waitstaff was behaving pissed me off. They’ll drive the place straight into the ground with that crap. Ya know? There are plenty of places to eat and drink. It was not fun, my friends.

And I’m calling it a day. Don’t forget to use our links if you’re going to do any business with our Amazon overlords this season. The links are all over the site, including underneath every update, and in the sidebar to the right. Thank you, guys! It’s much appreciated.