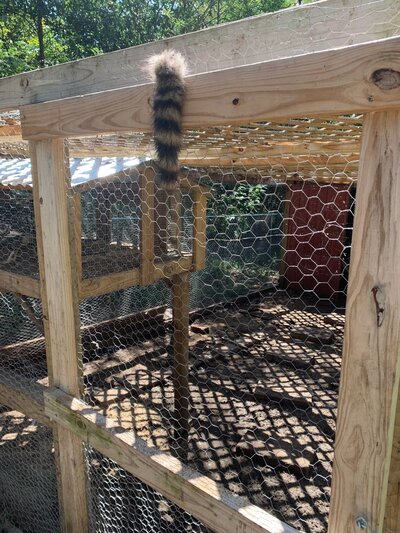 As mentioned, Producer Zipp sat in for me on the podcast while I was out o’ town recently. You can hear it here. In the episode, he tells a story about a crafty raccoon that kept attacking his flock of ducks and chickens. He mentioned that once the beast was finally dispatched, he hung its tail from the coop as a reminder to the raccoon community at large that they’d best tread lightly. Yesterday he sent me a photo of it, and I thought I’d share. That should do the trick! Raccoons, by the way, look cute and cuddly, but don’t let ’em fool you. They’ll mess you up.

I returned to work yesterday for the first time since September 29. I had 2755 emails. I was there for more than eleven hours, with no lunch, and got it down to something in the high 600s. I also had other issues that I’m not going to write about. But I came to the following conclusion: I’m either never going on vacation again, or never returning from the next one. Those are the only prudent courses of action, as far as I can tell. Today is going to be another ball-masher. Looking forward to it!

In the new episode of the podcast I did a rundown of the food we had while on vacation. ‘Cause food is one of the top three great things about vacation. You can hear it right here. And I mentioned that we also partook (I’m surprised that’s actually a word) of the local craft beers (another of the top three). Either by drinking them there, or buying stuff and muling it back home. Oh, we brought a lot of stuff back with us. And here’s a rundown for you fellow craft beer snobs out there. I kept impeccable notes! 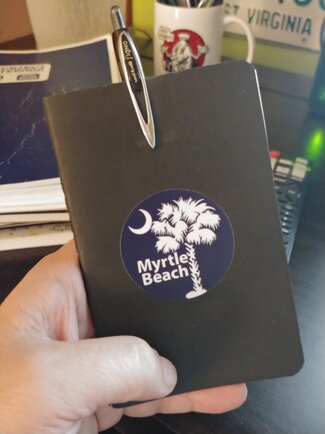 In the unlikely event that you’d like to know the components of those variety packs, let me know. I can provide the information. It’s all in my handy-dandy travel notebook. And, as you can see, we’re all about the hops. We only had one pint of a couple of those (like New South IPA), bought a six-pack of a couple and drank them while we were there (Overly Friendly, a great name for a beer brewed in the South), and others we bought a full case and brought it back (Wicked Weed’s kick-ass Pernicious IPA). Did we get carried away? Perhaps. But most of this stuff is not available to us in the Upper Pierogi Belt. Now we’re stocked.

Speaking of travel, I’m going to West Virginia on Saturday, to visit my parents. They’re leaving for Florida on November 1, so the window of opportunity is quickly closing. I’m driving on Saturday and Tuesday, and will be there Sunday and Monday. It’s another long-ass ride (7 hours, 50 minutes according to Google). So, there you go. By the end of the week I’ll be completely caught up at work and everything will go down the ol’ poop-catcher again. Oh well. I need to see my folks before they disembark for the winter. I’m going by myself this time, and hopefully the Van Halen Channel will still be up and running on SiriusXM. If so, I’ll be logging many hours on that thing. I might also listen to Mark Everett’s (E of the Eels) memoir, Things The Grandchildren Should Know. I read it when it first came out, but am feeling the urge to revisit it. Maybe via audio book this time? In any case, please contribute to Phantom Ass Syndrome research whenever possible. Together we can defeat it.

Are any of you in Canada? If so, I want to remind you that I’m still up and running with Amazon Canada. The USA kicked me out, for reasons unknown, but Canada (kinder, gentler folks) is still working. That’s all I’m saying. I’m not urging you to do anything out of the ordinary, just keeping you informed. It’s all about the information. Information is king.

And speaking of Amazon, I bought season 15 of Top Gear a couple of days ago, so I can watch a couple of episodes with my dad. I know he’ll love it. For years I’ve been encouraging him to seek out the show, and he just says, “Yeah, yeah…” But I’m going to sit down with him and watch an episode or two while I’m there. I picked season 15 because it contains the episode about the Reliant Robin, which is flat-out hilarious. He’s gonna love it! I think.

And I’m going to stop right here. I need to fill the void (eat lunch) and go back to work.

Have a great day, my friends. Comments will be open for three days.