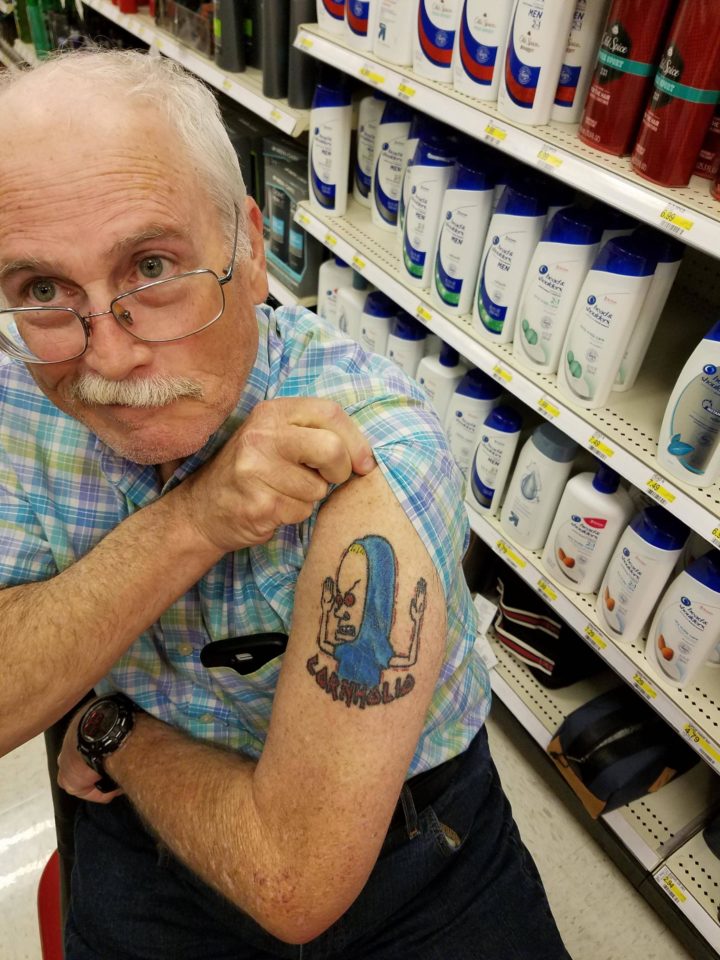 I think all my references are officially out of date. It feels like 80% of them are Seinfeld-based, which went off the air in 1998. But even the ones that aren’t from that show are pretty old. I was ranting at work a few days ago, for instance, and said, “Who do they think I am, Kreskin?!” Everybody just looked at me. And yesterday I asked the younger boy if he wanted to go to Arby’s for lunch. He declined, claiming it’s not healthy. “Oh, I’m sorry, Jack Lalanne,” I replied. He had no idea who I was talking about, but could tell by all the hand-waving and my expression of deep disgust what I was getting at. And while he was rolling his eyes and preparing to walk away, I added, “They have the meats, goddammit.”

So, there you go. At least that last one was fairly current. But I fear I’m viewed as a creature from a different era most of the time. When I was in Atlanta I worked with a lot of people who were roughly ten years older than me, and their dated references (“Land shark!” “Lighten up, Francis” “Well, excuuuuuse me!”) annoyed the shit out of me. Today my freshest references are generally 20 years old: probably older than the ones they were using in Atlanta. It’s disturbing. How did this happen??

I finally got a new passport photo yesterday, at Sam’s Club. It cost $4.97. The post office charges $15.00, and the one I got from AAA was $7.50. But that thing made me look like a bloated corpse they fished out of the Kanawha River. Before we got started yesterday I informed the young lady with the camera that I would need to approve the final photograph, and she said no problem. The hard woman at AAA would not allow any do-overs, but this girl seemed much more agreeable.

The first shot was not good. I looked like I’d polished off a cheese-lovers pizza, and was now experiencing catastrophic brick wall constipation. But the second one was better, and I reluctantly gave her the go-ahead. The problem: you’re not allowed to smile, or even smirk. And the lighting is horrific. Everybody comes away looking like something out of Re-Animator. And I’m going to have to live with this crap for ten years? Toney was trying to convince me to just go with the river cadaver photo, but I wouldn’t do it. I mean, seriously.

Speaking of healthy eating, I was in McDonald’s a few days ago and ordered a Quarter Pounder with cheese, no pickles. The portly lass in the petroleum-based pullover entered the info into the database, and said, “So, are you allergic to pickles?”

What do you think about that? Was she making me justify my order? Or was she telling me there’s a very good chance I’m getting pickles anyway? Perhaps she was merely curious? I’m not sure, but it annoyed me a little. Ya know? Am I too tightly-wound, or would that irritate you, as well?

Also, are some people actually allergic to pickles? I’ve never heard of such a thing.

I don’t feel great, my friends. I don’t sleep very well. I go for about four good hours, then fade in and out for the remainder of the session. I’m never completely rested. Maybe I need more exercise? Yes, that would almost certainly help. Also, I could drop fifty pounds. That wouldn’t hurt, either. It sucks.

Have you ever had trouble sleeping? How did you fix it? I’m not climbing into scuba gear before bed, thank you very much. And the thought of going to one of those “sleep clinics” freaks me out, for some reason. Somebody watching (filming?) me sleep? That’s weird, man. Especially if there’s audio. It would probably turn into some kind of underground party tape or something.

Any problems with sleep? Please tell us about it. I used to walk around in my sleep when I was a kid, but that stopped back when Kreskin was still a reasonable reference. And I used to dream (I guess) that I was awake and completely paralyzed. It was terrifying. I’d lie there trying to move, my heart hammering in my chest. Thankfully that also hasn’t happened in many years. Not a fan.

I need to go now. I’m not completely satisfied with this update, but my brain isn’t functioning very well. I’m just going to have to go with it, and try again next time.