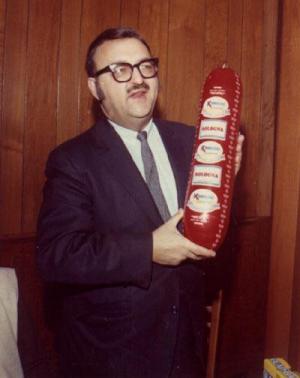 This morning I finally removed all the music from my work iPod, to make room for more podcasts and radio shows, and the like. I don’t know the psychological reasoning behind it, but I only want to hear spoken-word stuff at work; music doesn’t scratch the itch.

And at home it’s the exact opposite.  As soon as I hoist myself off the dormancy platform, start the coffee a-brewing, and shuffle-poot my way to my office, I turn on the stereo.  And it never goes off.  Music is playing at all times when I’m home, and it’s always cranking in my car.  But at work… no.

Anyone want to take a crack at figuring that one out?  Yeah, I didn’t think so.

And just so you know, I’m still using my beleaguered 2GB iPod nano, from 2001.  It serves me, day after day.  It’s a relic that belongs in a gadgetry museum, but it still works the same as it did on Day One.  I half-heartedly gave my phone a try as a podcast delivery device, since it has a 32GB memory card in it, but didn’t like it.  That nano feels just right to me; we’ve been through a lot together.

I just let Andy (aka The Finest Example) out, so he could deliver some yard crullers.  And he took off.  As soon as I opened the door he exploded like a greyhound from the gate.  He went rampaging across the street (gulp), and disappeared between two houses.

What the hell, man??  That dog is old and portly, with Mickey Mantle knees.  I haven’t seen him move that fast in five years.  Did somebody crush up a Viagra and sprinkle it on his food?  It scares me when he runs across the street like that, but I like to see glimpses of the old Black Lips Houlihan.  It makes me think he’ll be with us for quite a few more years.

You know, unless he gets run over by a garbage truck.

Do you ever get shop-talk mixed up at your current job, with the shop-talk from a previous job?  You know, terms and phrases, and that kind of thing?  I do.  I’m in distribution, which (as you all know) is my life’s passion.  And just last night I referred to a transfer between two facilities as an IBT — which stands for inter-branch transfer.

It’s an ancient term from the Atlanta days, and is something I probably haven’t heard since 1996.  It’s very strange how my previous lives sometime bleed into my current one.  And make everyone think, “What the hell is this idiot talking about now?  IBT?  Is he having a stroke?”

One day when I was working at WEA Atlanta, years after I’d left Peaches Records, my phone rang.  And I answered it (inexplicably), “Hi, thanks for calling Peaches!  This is Jeff.  How may I help you?”  I mean, this was, like, five years later.  How does something like that happen?  Shit misfiring in my brain?  Time-released retardation?  I’m not sure, but it’s disturbing.

Has anything like that ever happened to you?  Previous jobs suddenly flaring up and insinuating themselves in your current world?  If so, please tell us about it.

And Surf Reporter Brian sent this to me a few days ago.  He snapped it while waiting in line at a KFC in Philly.  Is that perfection, or what?  It’s beautifully framed, with so much going on.  Love it!  I’ve added it to the big fast food extravaganza page.

Before I go, I want to link to two sound files that didn’t get enough attention the first time I posted them.  This one is a mysterious message left on Steve’s cell phone.  Sexy!  And this one comes courtesy of our old friend Buck.  It’s a message left on a vent line, at some radio station in Morgantown, WV (I think).  Both make me laugh, and they got lost in the shuffle the first time ’round.

And that’s going to do it for today, my friends.  I’ll be back tomorrow with more of this high-quality material.