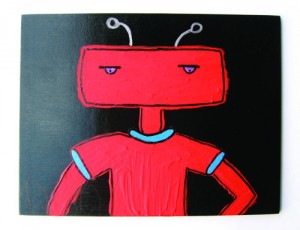 Another thing that pisses me off is voicemail systems designed to sound like real people.  My credit union, which is conveniently located in Hollywood, California, recently installed one of those deals, and it bothers me.

When I call, it tells me to listen carefully because their menu has changed, and I always holler, “No it hasn’t!  I just called yesterday, you lying sack!!”  Then she starts prompting me to push buttons, in response to incredibly stupid questions.

“If you would like to complete this call using the touchtone keypad on your phone, press 1.”  No, I’d much prefer to navigate your labyrinth via a series of tones emitted from my anus.  A squeaker means checking, a tugboat blast means savings, etc.

“If you would like to enquire on your account, press 1.”  WTF?  Why do you think I called?  This is an automated banking system.  I know you’re never supposed to assume, but come on.  It’s like an ER nurse asking a man with a steering column through his torso, “Can I help you with something?”

Then she tells me to punch in my account number and password, and that’s when the “realness” kicks-in.  She says, in a chirpy tone, “Hold on, while I look that up for you!”  And I can actually hear the clickety-clack of a computer keyboard.  Except it’s all bullshit, because it’s just a series of canned, digital responses.

Throughout the rest of the call, she (this faceless robot) talks to me as a human being might.  In the old days it was very machine-like, but now there are inflections to their “voices,” and sometimes they even have a British accent.  I guess the higher-ups believe this sounds more sophisticated…  And, of course, they’re right.

I don’t like the fake real person, it agitates me.  I certainly don’t mind a genuinely fake person, in fact I prefer it to a live human.  Live humans REALLY get under my skin.  Fuck them.  But when you start trying to fool me, or give me a warm and fuzzy feeling via your freaking voicemail system… Well, that’s a bridge too far.

Man, I’m getting all worked up, just writing about it.

I’m going to attempt to be a little vague here, but there’s a man I sometimes encounter, at a place where I spend sixty hours per week.  (Pretty slick, huh?)  He’s in his early sixties, I’d guess, and seems like a friendly fellow.  I say “seems” because I’ve never actually talked with him, because, you see, he speaks nothing but Russian.  He’s reportedly newly arrived to this country, and hasn’t learned the language.  At all.

And how does something like that happen?  How does a Russian man, in his sixties, end up working for a janitorial service in Wilkes-Barre, Pennsylvania?  I’d love to have a conversation with him, and get the full story.  I’m fascinated, because it all seems so improbable.

Maybe we could email each other, using the Google translation tool, or something?  Can you imagine just suddenly being relocated to a country where you don’t know the language, not one word, and going out to work every day?  He must feel completely isolated.

He sometimes sits in the break room, listening to an mp3 player, and I always wonder what he’s playing.  Maybe the Russian Jean Shepherd?  The Ukrainian David Sedaris?  The Armenian Weezer?  Who knows?

Have you ever attempted to communicate with someone who doesn’t speak a word of English?  How’d you do it?  Also, have you ever been somewhere, completely alone, where you didn’t speak the language?  Tell us about it, won’t you?

I got a small dose of it when I moved to northeastern PA, but it’s not exactly the same.

I’ve been listening to the Adam Carolla podcast at work, and find it to be hilarious.  Since I’m almost completely cut-off from popular culture, I didn’t know much about him (still don’t), but his podcast kills me.  He told a story a few nights ago about a receptionist at the E Network who, he said, was “lightly dusted” with Down Syndrome, that had me wiping away tears of laughter.

Do you regularly listen to any podcasts?  Which ones can you recommend to me?  ‘Cause I’ve got an inordinate amount of listening time on my hands…

I mentioned that I’m planning to buy the $139 Kindle soon, and several of you said I should opt for the 3G model instead.  Can you tell me why?  I thought I’d be using it like an iPod, for books.  When I’m home I could load stuff on there, and read it whenever I wanted.  I don’t download songs to my iPod when I’m out and about, and don’t see why I’d need to do it with books either.

But, I admit that I don’t know a whole lot about it.  And I often pass on things that seem useless to me, only to regret it in the future.  So, help me understand why the 3G model is the way to go.  I don’t want to screw this one up.

And Toney took the day off, so we’re going to spend the afternoon together.  Yes, it’s a novelty, but I think it might be fun.  We’re going to start at Five Guys, and take it from there.  Mmmm… Five Guys.  And I can see a six-pack of Dogfish Head in our immediate future, too.  Oh, yes I can.  Thursdays are my weekends, so I’ve gotta make ’em count.

I’ll be back tomorrow, I hope, with another WTF Friday entry.  I have no idea what it might be, but I’ll come up with some kind of ridiculousness… maybe.