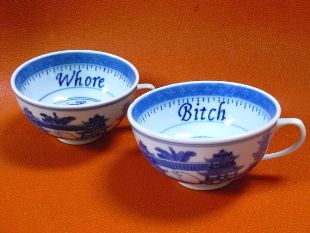 You guys will be glad to know that I didn’t have any dreams last night.  So, rest easy.  It was just Death Lite, with no cranial activity that I can recall.  Yeah, I know: it’s a relief.  Sorry about yesterday’s weirdness.  But it was 100% true!

When I got up this morning I let Andy out, so he could sling some urine, and serve up a batch of his famous yard crullers.  And it was breathtakingly beautiful outside.  I think I actually said “Wow!” aloud.  The sky is blue, and everything looks impossibly crisp and colorful: like when Dorothy wakes up in the suburbs of Oz, or whatever.

However… it’s all a cruel joke.  It looks like spring, but it ain’t.  I think I had frost on my love handles when I came back into the house.  Shit!  This isn’t spring, it’s just winter in a novelty hat.

A few days ago the older boy went to Guitar Center with one of his friends, and accidentally left some guitar strings in his car.  The next day he had something to do, but asked his friend to drop the strings off at our house, if he was out.

“Dude, your dad is scary,” the friend said.  “I’ll just leave them in the mailbox.”

Scary?!  What the hell, man?  I don’t understand that, but hear it from time to time.  I guess I’m not really in tune with the way people perceive me?  I mean, sure… I’m a bit tightly-wound, and have a low threshold for bullshit.  But it’s not like I’m Elaine’s father.  Sheesh.

Do you ever encounter this?  People perceiving you in some surprising way?  Especially when it’s more than one person?  It’s disconcerting.  Tell us about it, won’t you?

I’ve got Brussels sprouts, broccoli, and green beans in the steamer upstairs.  It smells like a family lives here that communicates with farts.  That’s the way they talk: via the tones of their own flatus.  Our house smells like that, right now.  In fact, it smells like they might’ve had a long argument…  Just thought you should know.

And how surprising is it that I’ve stuck with this veggie regimen (vegimen?)  for more than a week?  I like ’em, what I can say?  It’s not like I’m sacrificing anything.  It’s just a small hassle preparing them, and sometimes a small hassle is all it takes for me to say fukkit.  So, I’m a little surprised.

Hey, if you’re interested in contributing to the Surf Report beer and Little Debbie fund, you’re in luck!  Just click through the mug to the right, and go wild.  All contributions are sincerely appreciated.  My life is basically funded by the proceeds generated by this site and the book, and there are peaks and valleys.  Right now I’m in a valley, so again… much appreciated.

I was listening to Adam Carolla’s podcast a few days ago, and he was talking about things he plans to go to the grave without ever doing.  He mentioned two:  learning how to tie a neck tie, and buying a lottery ticket.  Alison, the news girl, contributed one:  eating calamari.

Do you have anything similar?  These sound like things that weren’t planned, they just happened.  And now they want to keep ’em going.  What do you have on this subject?

A few of mine, off the top of my head:  crapping at work (my proudest achievement), eating Lucky Charms cereal, using cologne (men should smell like nothing).  Got anything?

Also, since I’m apparently a “scary dad,” what dads of other kids stick out in your mind, from your childhood?  Not necessarily the scary ones, just the ones that are memorable.  Please tell us about it in the comments section.