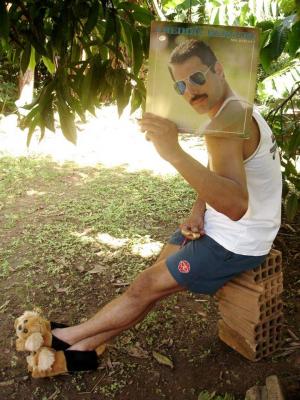 Thanks for all the tips on how I should handle my hasty promise to cook the family dinner every Saturday night. I’m going to try a few of your recipes, I really am. The one with chicken breasts and a shitload of cilantro sounded especially good. Needless to say, I’ll document everything here. Please stay tuned. Hopefully there won’t be a fire that leaves nothing but a charred circle with a toilet in the middle.

A few years ago a Surf Reporter sent me this recipe for a “fartless” bean conglomeration, called the Beer Drinkers’ Bean Pot. I made it several times, and thought it was fantastic. There was only one problem: it was fartless. What’s the point of eating a load of beans, if there are no post-game fireworks? No, I’m only joking… Toney wasn’t a fan. It was too spicy, or something. I can’t remember. But she didn’t care for the bean pot. It was a shame, really.

And I think it might be the last non-microwave, non-gas grill thing I’ve cooked. It was a looong time ago. Oh yeah, this is going to be interesting. But I’m gonna master it. Mark my words. My Saturday dinners might start out a little rocky, but will eventually become a highlight of the week. That is my proclamation.

I’m prepared to hit the road tomorrow. It’s a 516 mile journey to my parents’ house, so I’ll have plenty of time to sit ‘n’ think. I have a couple of problems I want to solve while I drive, and it’ll be almost like meditation. It sounds crazy, I know, but I’m looking forward to the driving part, almost as much as the being there part.

Today I got an oil change, and a haircut. I also did all my laundry, and washed the car. In the morning I’ll throw everything into a bag, and point the hood toward the greater Dunbar area. Unless, of course, I wake up in the morning and call the whole thing off. It’s a distinct possibility. My brain chemicals don’t always mix in a favorable way, and tangents occur.

A few days ago a person I knew from Peaches Records in Greensboro contacted me via Facebook. We were chatting back and forth — it had been a long time — and she told me I said something all those years ago that she will always remember.

Bracing for something horrible and/or douchetastic, I read on… She said the two of us were working one day, and she asked what was my favorite part of a cupcake. And I reportedly answered “the paper.” Of course I have no recollection of this conversation, but she still remembers it 25 years later, or whatever.

It’s strange what people remember, isn’t it? I seize on little bits of ridiculousness like that, too. And sometimes forget the main part of the story. Have you ever had someone tell you about something you supposedly said a long time ago, that you don’t recall? Was it a good thing, bad, or something you simply don’t believe? Please tell us about it in the comments section below.

Something I MIGHT remember for a long time: A few days ago at work a guy was going on and on about some girl in a different department. He had the hots for her, and was talking about her nonstop. Finally, one of his co-workers said, “Forget it, man. She’s an 8, and you’re a soft 5.” I about shit. It’s possible that one will stick with me for a while.

Remember that pair of tighty-whities a teenage girl handed me at a minor league baseball game? Heh, that’s probably a confusing sentence, if you don’t know the context…

A few months ago we went to a Scranton/Wilkes-Barre Railriders game, and there was a booth inside the front gate, where cutesy girls were handing out sample pairs of 1970s-style men’s underwear. Weird. Almost every guy in the stadium was walking around with a pair of blindingly white briefs in their hands, which was surreal to say the least.

Well, mine have still never been used. I saw them today, in my drawer. I washed them, but have never worn them. I thought you’d like to know. I could be totally wrong about this, but believe that kind of underwear is now favored by:

I’m not sure how I would know such a thing, but believe I’m right on the money. I have a feeling they’d be comfortable, and might have some nostalgic appeal, but I’d be terrified I’d be in a car crash and paramedics would have to cut my jeans off. Ya know?

A couple of weeks ago I was talking with a woman, and she told me about a really bad nursing home where her elderly aunt used to live. The old lady had a prosthetic leg, and an open wound on her real leg. When a family member went to visit her, they learned the wound was now infected. The nursing home was supposed to clean it, and change the bandage a couple of times per day. The family, now pissed, investigated, and decided the nursing home had done nothing. Until they looked at the prosthetic… and saw the bandage there.

Can that possibly be true? I love it, but don’t believe it. I want it to be real, but come on. What are your feelings on this important matter? And what kind of bullshit stories have you heard recently? Anything? Fill us in on it. I’m a connoisseur of pure bullshit.

Finally, when I was in that management training class a few weeks ago, they were continuously putting everyone on the spot, and springing stuff on us. At one point we were told to stand up, walk out into the middle of the room, shake someone’s hand, and tell them your favorite movie of all time. “Don’t think about it!” the woman ordered. “Just blurt it out.”

When I heard “favorite movie,” one thing came to mind: Animal House. If I’d had time to think about it, I might’ve gone in a different, more high-brow, direction. But probably not.

And now it’s your turn. Don’t think about it, just blurt it out. What’s your favorite movie of all time? Not giving it any consideration, just channeling your soul or whatever, is the important part.

And I’m going to try to update this site every night, while I’m traveling. I’ll have my laptop and camera, and will be posting from my parents’ kitchen table. So, check back often. It might be an erratic mess, but I’m going to attempt to chronicle everything same-day.

See ya soon, my friends!