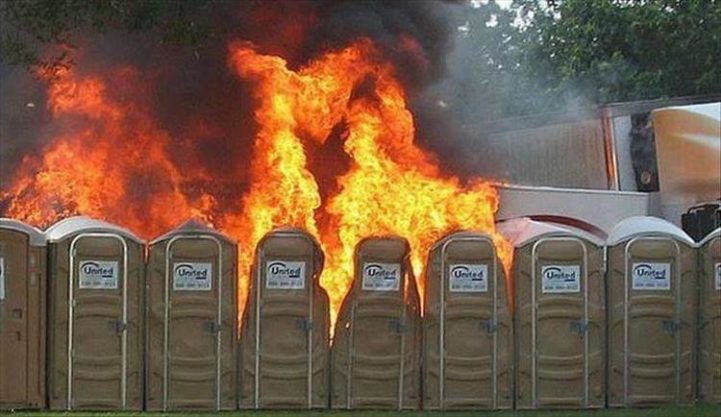 I don’t want to get into all the gory details. But I’ll tell you this much: if I’d been working during the past couple of days… my 35-year streak would’ve been in serious jeopardy. In fact, I’m a little nervous about going in today. I’m not sick, not really, but didn’t feel great yesterday. Not terrible, but something was definitely askew. And there were “fireworks,” my friends. Spectacular and completely out of the blue (brown?) fireworks. I’m semi-concerned. But I think I’ll be OK. There was a series of aftershocks, but they seem to be coming farther and farther apart. 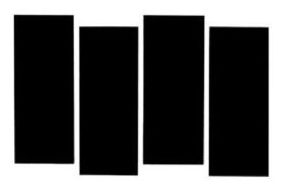 The older boy is friends with a portly gentleman who has fully and completely embraced it. He’s gone all-in on the portly. And he supposedly got a new tattoo during the past couple of weeks: the Black Flag logo — which I’ve included to the right, in case you’re unfamiliar. But his version is four crinkle-cut french fries. I’ve made it clear that I need a photo, but so far that request has remained unfulfilled. I have to admit… I love the concept. Right?

For some reason, it reminds me of a story the same boy told me years ago when he was still in grade school. He said the teacher wanted everyone to write a poem, something to do with springtime. And a large girl raised her hand and said, “Can anybody think of a word that rhymes with Pringles?”

Have you ever watched a show called Restored, on HGTV or DIY? I’ve become somewhat fixated on it. The thing is fantastic. It features an impossibly upbeat and positive man in a cowboy hat who restores historic homes. They’re not always super-old — sometimes they’re from the 1950s. But he goes in and attempts to bring them back to the original while keeping them functional. He’s into the history and knows his stuff. He generally does research and finds old photos of the house, and tries to recreate the original look. Even going so far as to use period wood, etc. Sometimes he discovers secret panels or stained glass windows hidden by the drywall, or whatever. It’s fascinating, and it’s my current favorite obscure deep-cable program. I’ve got the DVR set to record every episode, new or repeat. And I’m bingin’ as fast as I can… What’s your current show in that category? Anything?

Remember I mentioned that I had eight days of vacation time I need to burn before 12/31? Well, I briefly considered taking five of them and going to a so-called “retreat” somewhere in Massachusetts. It’s a four-hour drive from here, and it’s a big country farmhouse owned by a couple of writers. They rent out rooms to people who want to get away and work on a writing project. I reread the beginnings of a novel I’d been working on a couple of years ago and thought it was pretty hilarious. And I’ve always loved the premise. I thought I might be able to go to this retreat (if they would approve me) and try to get the project back on track. It’s fairly inexpensive, and would certainly fall into the category of “an adventure.”

It’s not going to happen, of course. At least not this year. But I checked into it and read all there is to read. I’d have some concerns. Including, but not limited to:

No cell service, whatsoever. Your phone would be nothing but a block of plastic and metal. I don’t care for that. There’s WiFi in the house and a landline. But I don’t know…

The house would be full of other writers (including two “artists in residence”), all of whom would undoubtedly be more serious and almost certainly more talented than I am. I’d walk around feeling like I don’t belong, a complete and utter fraud. It’s something I’m familiar with, but don’t really enjoy.

Shared bathrooms. I mean… do I have to even get into this? I’d have to set my alarm for 3 am and go in for a sitdown, under the cover of darkness.

The food situation. They give you a bin in the kitchen, and another inside the fridge, where you can keep stuff. And you can cook down there, but I wouldn’t feel comfortable. Ya know? And I couldn’t use GPS to find a goddamn Denny’s or anything, ’cause the phones are deader than Kelsey’s nuts. Makes me uneasy.

They have to evaluate your work and approve you before you can stay there. I guess I could submit something like this, right? To tell you the truth, I think I would be approved. But it would be yet another thing to worry about.

So, there you go. I might consider it in the spring. We’ll see. Probably not… I mean, seriously.

I released a new podcast episode today. And to be perfectly honest, I’m not very happy with it. There are a few good lines, I think, but overall… not my strongest effort. I’m trying to stretch a bit, and challenge myself. I’m attempting to make the Monday episodes more coherent and about one overarching subject. It’s more difficult than anticipated. But I’ll get there. Maybe. Please bear with me. If you’re new to the podcast, please don’t start with this one. But if you’re a veteran, there are a few funny moments. So, proceed with caution. Next Monday’s will be better! And the Thursday episodes are always just a load of goofy fun. Pass the beer nuts.

For a Question, I’ll just keep it simple. What’s the most memorable pet name you’ve ever heard? I knew a girl in Greensboro who had a cat named Polyester, and I loved that for some reason. Also, Mark Maynard had a cat named Eartha Kitty. Heh. And Marc Maron has a cat named Buster Kitten. They don’t have to be puns, of course, but share your faves in the comments.

And I’m going to call it a day. Have a great one, my friends!