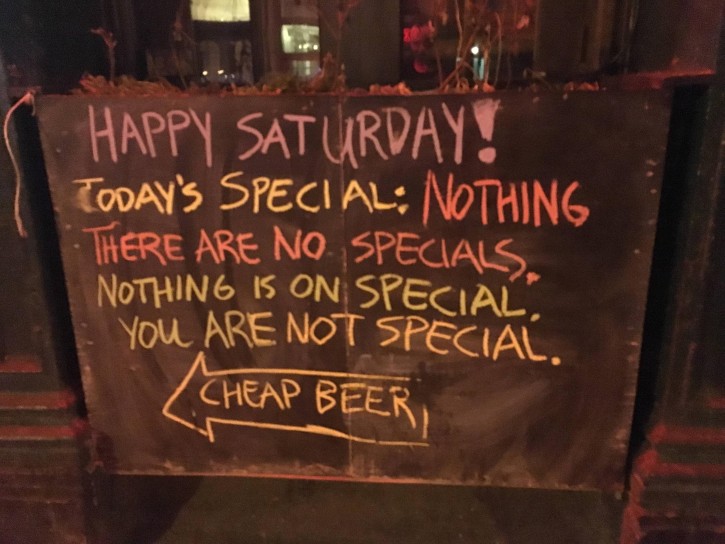 Yesterday I had to piss to like Man o’ War, and stopped at a Sheetz to find sweet relief. The place was pandemonium, and I walked in with two doucheketeers approximately 19 years of age. If John Hughes were still alive and making teen comedies, these guys could’ve easily been slotted into “rich prick” roles. They had that air about them: a kind of deep-seated arrogance that comes from a life of privilege. At least that’s how I sized them up during our 10 second encounter.

I navigated through a sea of people pouring themselves coffees and adding a little of this, and a little of that. Sip sip… add some more, stir…  It’s convenience store coffee, assholes! Jesus. My bladder was stretched to its fullest capacity, and now that the end was near the anguish intensified for some reason.

And as the bathroom entrance came into view, I saw those two guys go in. Great! I’m not a fan of communal elimination of any kind, especially shoulder-to-shoulder with two snarky teenagers with high self-esteem. So, I went to the ATM to give them a little lead time. Finally, I entered the men’s room with not much time to spare.

Yeah, both those guys were in there shitting. There were two stalls, and they occupied both of them, and were apparently engaged in some kind of ass-blasting contest. They were putting their whole diaphragms behind it, making as much noise as possible, and laughing and laughing and laughing. I stood at a urinal peeing one of those kinds of pees that had been pent up for so long it kinda burned. And those two idiots were creating something that sounded like the first 25 minutes of Saving Private Ryan. With their anuses.

I just don’t understand any of it. I know women like to go to the bathroom together, but what I endured yesterday just doesn’t compute with me. Are dudes crapping together now? How did they synchronize it? Did they discuss it on the way over, and decide to turn into sport? Why so much sustained flatulence? Doesn’t it usually taper off a bit? What the hell’s going on with our society?? I’m near tears.

Speaking of sports, the woman who was cutting my hair yesterday asked who I was pulling for in “the big game” next weekend. Has the NFL successfully intimidated everyone, including hair stylists, into never using the phrase “Super Bowl,” for fear of being sued? It felt like an odd choice of words. In any case, I told her I don’t know anything about it. I’m not even sure who’s playing. Boston? Do they have a team? I have no idea. And that abruptly ended our conversation. She was clearly taken aback by my strangeness. I probably should do a better job of faking it, huh? Like I do with adulthood.

Just wondering… Have you EVER owned a coffee maker with a carafe that doesn’t leak when you’re pouring water into it? I’m a very old man, with an inordinate amount of coffee maker exposure, and they all leak. I try to pour very slowly, thinking that will help. But it only takes longer, with the exact same results: water all over the counter. It’s 2016. We all carry around computers in our pockets. Why no corresponding leap forward in carafe technology?? I’ve about had it.

We bought a new TV around Christmastime, that’s modern and connects to the internet, etc. Our previous living room TV was a throwback to the 1990s: a big-ass tube set. But this new one allows us to watch Netflix upstairs, and not just in the family room downstairs — which the boys dominate. Oh, it’s opened up a whole new set of bad habits. I’m now watching Too Much Television… Last night, for instance, Toney and I watched three episodes of House of Cards. We’re almost finished with Season 3, and will have to move on to something new. And then, after she went to bed, I watched ANOTHER three episodes of The Killing. I’ve become mildly fixated on that show, and rush home from work and watch one or two episodes every night. But last night was ridiculous. I’m disgusted with myself. I really am.

Question of the Day: What do you think should be taught in high school, that’s not? What real-life skills are people lacking these days? What are your thoughts on this? Use the comments link above or below.