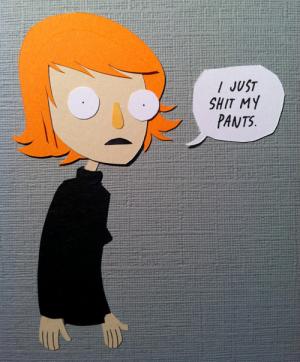 I think there’s a dead squirrel rotting in the wall of the bunker. It smells like decaying rodentia down here. I’m next door to the garage, where critters sometimes frolic.  And, of course, what starts with laughter often ends with tears, and one of them kicks the bucket inside a wall for some reason. It happens every summer.

And, all I can do is wait for it to go full-skeleton.  Oh sure, I could rip out several sections of drywall and begin searching for the corpse, but that ain’t gonna happen.  No, I’ll just allow nature to take its course, and all the stinking meat to rot away.

It’s a life of luxury, I tell you. I’m living the goddamn Life of Riley here.  Pass the beer nuts.

And speaking of beer, I haven’t had one in weeks.  No particular reason, I just don’t want any…  Do you think I might have a tumor?  This is highly unusual behavior.

Nancy is re-thinking her decision to divorce Nostrildamus.  It looks like they might try to work it out.  She told Toney she’s not really all that pissed-off at him, for banging a 23 year old teaching assistant, she just doesn’t want her Women’s Studies colleagues to think she’s backing down to a man.  Or something.  I can’t really keep it straight, mostly because I don’t care.  But it appears Nossy might not be out of the picture, after all.  Please stay tuned for further developments.

Half-Shirt’s youngest son is apparently in a band, and they’ve been practicing outside, in their back yard.  And yesterday they had the amps cranked up to full-Cheap Trick volume…  I recorded this on my phone, sitting in a chair in our living room.  The windows were practically rattling.  But, I have to admit, it didn’t sound too bad.  Everything – every song – had a reggae feel to it, including “The Weight” by The Band.  Groovy, man.

Years ago, when that kid was about 12, I found his MySpace page and it was pretty interesting.  There was a large rotating joint, the cursor was a pot leaf, and he listed his nickname as “Bongwater.”  And now, six or seven years later, he’s got a reggae/jam band fixation.  Who could’ve predicted such a thing??

I know a person (purposely vague) who has been trying, for about four years, to talk me into taking my family to an “all-exclusive” resort in Cancun.  Yeah, she always said “all-exclusive,” which caused me to grind my teeth.

But a few days ago she started up again, and said “all-inclusive.”  And it wasn’t a mistake, either.  She used the correct term several times.  I wonder if someone corrected her, or if she figured it out on her own?  I’d love to know, but there’s no way to find out, without embarrassing her.  Oh well.

It’s a funny thing, though.  Now that she’s saying it the right way, I’m suddenly interested in going to Cancun.  Previously I just listened to her, smiled and nodded, and extracted myself from the conversation, ASAP.  But now that “all-exclusive” is no longer a part of the equation, I’m almost sold on the idea.  I asked her to get me some brochures.

I got my car inspected a couple of days ago.  My sticker was expired, and I was sweating bullets every time I drove through our little town.  Those cops are predatory, and can spot last year’s color from a hundred yards.  I just knew I’d get bent over the proverbial davenport, but somehow got away with it.

Years ago, in Atlanta, I was pulled over while driving to work.  This was post-Sharon, pre-Toney, in a dark period of hard-drinking and fully-realized couldn’t-give-a-shit.  My inspection sticker was expired, my plates were expired, my driver’s license was from North Carolina (expired), and I had no insurance.

For some reason, the cop was not amused.  His face turned bright red, and he yelled, “I’m going to impound your car, and take you to the Jefferson Street jail!”  I don’t know where Jefferson Street is, but there was an implication that it wasn’t exactly paradise.

I almost deposited a load into the seat of my tighty-whities, and my knees nearly buckled.  But, for whatever reason, the guy let me go.  He was infuriated one minute, and the next… he was telling me to get the hell out of there.  He warned me, however, that he was going to pull me over again, the next time he saw me.  And if I hadn’t got my shit together, I was going to jail.

Yeah, and suddenly I was nothing if not conscientious.  Everything was current within 24 hours.  I had to pay an enormous amount for insurance, I remember, because I hadn’t maintained continuous coverage.  But I avoided Jefferson Street, and that was the important thing.  Sheesh.

Andy’s going to the vet tomorrow, for his yearly check-up.  It’s always an ordeal, and takes two of us to keep him under control.  Usually they have to slap a muzzle on him, and he compresses his ass sac and blows fish oil all over the wall.  I’m not looking forward to it.  Hopefully he doesn’t flip out and go crashing through plate glass, or something. He’s the most neurotic animal I’ve ever known, by far.  Please say a prayer for us.

And I’m calling it a day, my friends.  I don’t really have a specific question, but feel free to comment on any of the nonsense above.

Can you outdo me in the irresponsibility department, based on my early-Atlanta story?  I have some pretty good post-Kelly, pre-Sharon Greensboro irresponsibility tales I could tell, as well.  Maybe next time?  What do you have along those lines?  The more pathetic and ridiculous the better.

Have a great weekend.  I’ll be back on Monday.