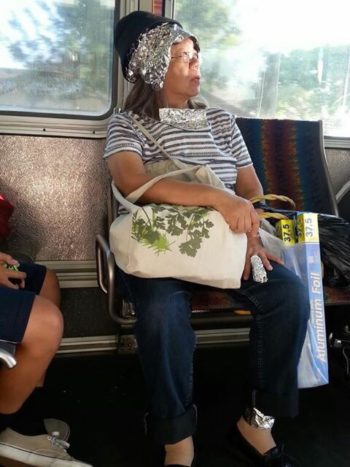 It’s hotter than Satan’s urethra up here. Sweet sainted mother of the Hager twins! I hate this part of summer, when it metastasizes and takes deep root for weeks on end. Just a hazy, thick hellishness ‘round the clock… I’ve said it many times before, but this is how I rank the seasons:

I like the segue seasons much better than the ones that run wide-open. And the segue from hot to cold is especially sweet. I can’t wait to start hearing those quacking ducks (or whatever) that fly in Vs right before the hell season comes to an end. Shouldn’t be too much longer, right? …Right? Pass the beer nuts.

Speaking of that, I haven’t had a drop of alcohol in a month. One day I got up and told Toney I wasn’t going to drink anymore. Nothing happened to trigger it; it wasn’t like I bottomed out in some spectacular Gary Busey fashion, or anything. I just felt like I was done, for whatever reason. We’ll see how it goes. So far I haven’t even thought about it, not really.

Yesterday the younger boy and I went to see Animal House in a theater. They’re screening it a few times around the country, because kids are about to go back to college. It’s one of my all-time favorites, and I jumped at the chance to see it again on the big screen.

Unfortunately, there were only about ten people at the 2 o’clock showing. No respect for the cinematic greats! All I know is… I’ve probably seen it ten times by now, and still laugh my ass off. It’s not just a funny movie, it’s a good movie. It was written by true comedy geniuses (including this one), and nearly every scene is memorable. Love it!

The downsides of yesterday… It cost $12.50 to get in, which is a tad steep, I think. Also, there were two women there – either drunk or naturally obnoxious – wearing togas and talking non-stop. Why would you go to something like that, get all dressed up in a ludicrous outfit, and talk through the whole movie? I sincerely don’t understand the idiocy of human beings.

And speaking of the all-time greats, a former writer for The Onion has produced a full-length Seinfeld script, set during the days immediately following 9/11. It’s getting a lot of attention, and is pretty damn funny. I’ve read about half of it so far, and it’s good. You can check it out here. It’s not something that could’ve ever aired, of course. But the tone and feel of it are pretty close to perfect. 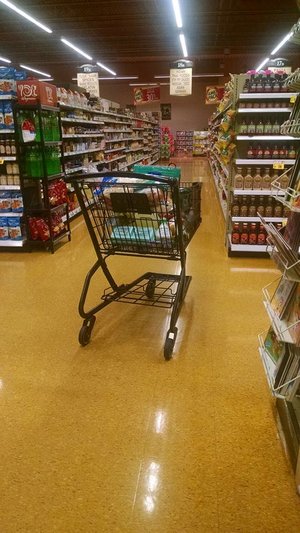 Toney took this picture at Wegmans this weekend. She’s always ranting about inconsiderate douches and douchettes at the grocery store, and this is her latest example. A person walked away from their cart (“probably talking on a cell phone and/or carrying a Starbucks cup,” she said), blocking four aisles at once. A new world record? I’ll have to check with the sanctioning body, and get back to you guys.

Oh, and I wish it be noted… My mother was recently in the hospital for eight days, in a fairly serious situation, and not once did I go on Facebook and make it all about me. Thank you very much… She’s home now, doing well. They sucked her gall bladder out, cleared a bile duct blockage, and got a “raging” infection under control. It was scary, but she’s good. I just talked to her. She’s watching Family Feud.

A couple of months ago I bought The Fugitive, the complete series, on DVD. It was a great show, and I’m watching two episodes almost every day. Right now I’m on disc 13, out of 32 (I think). And I find myself doing some weird stuff… possibly fueled by concerns about aging.

Whenever I start a new episode, you see, I grab my Kindle Fire and pull up the IMDB page for it, and see how many of the actors are still alive. Almost all of them are dead, except when a kid appears. It’s mildly disturbing. The show started in 1963, and was on for four seasons. And they’re all fucking dead??

I also do this thing where I calculate the age of a person who is portrayed as elderly on the show, to see how old the actor was when it was filmed. It’s a disheartening exercise, my friends. There was some old lady in an episode I watched recently (set in WV, but clearly filmed in SoCal), they called “Gran.” She was a stereotypical little old lady, who was something like 48 when they filmed the episode. What the hell, man?

Do you do things like this? Or is it my own private neurosis?

Finally, what are some things you enjoy, but don’t like to advertise because society has decided it sucks? I’ll give you one: Domino’s. I sometimes order a large thin crust pizza from them, with bacon, onions, and green peppers. And I’m not kidding… that shit is fantastic. However, it’s been decreed from on-high that Domino’s is horrible. I think it used to be, but they made some changes a few years ago, and it’s pretty damn good now. Especially for the price.

Do you have anything on this? If so, please tell us tell us about it in the comments.

I have more, lots more, but need to go back to work. I’ll see you guys again soon.