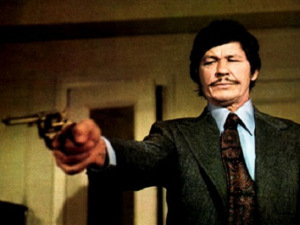 I watched Death Wish on Netflix Instant last weekend.  I thought it would be entertaining, in a grimy 1970s inner-city kinda way.  And it’s always fun to watch someone snap and get massive revenge on the dregs of society.  But it wasn’t all that good.  Or maybe I wasn’t in the right frame of mind, I don’t know.

What are the best revenge movies?  Death Wish was a big, big deal when I was a kid, and I thought I’d enjoy it like a mindless cartoon.  Oh well.  Maybe you guys can suggest an alternative?

I watched a Michael Caine revenge flick a couple of months ago, called Harry Brown.  It was much more satisfying.  And, as mentioned, I enjoyed God Bless America, recently.  What are some other good ‘uns?

And not that it matters, one way or the other, but was Charles Bronson an Asian?  He looked like he was from the Pacific Rim.

I was sitting in Wendy’s a little while ago, and they were playing Haircut 100 over the speakers.  Weird, huh?  At the ass-end of 2012, near Scranton, PA, we’re eating our fast food burgers to an obscure pretty boy British new wave pop song from 1982.

And I started thinking… Wonder how big of a fan-base Haircut 100 has in the Scranton/Wilkes-Barre area at this point?  Enough to support a tribute band?  How about a Haircut 100 tribute band made up exclusively of obese gentlemen over the age of 50?  I think I might be on to something…  Don’t steal my idea!  If all goes well, Love Plus One will be playing the Hazelton Moose Lodge within three months time.

I didn’t get out of bed until noon today, and had to groan and wallow and tap some inner-strength to make it happen, even then.  Stoopid high-stress job… Then I went downstairs, started some coffee to brewin’, and typed the following at Twitter:

A gassy ninja is an ineffective ninja.

But wouldn’t that make a great Gas-X commercial?  They could show a ninja silently spinning and moving from room to room, trying to sneak up on someone.  Until… he makes a sudden movement, his butt trumpet goes off, and the mission is compromised.  People would love it!

What other Gas-X, or Bean-O, commercials can we write?  Help them out, won’t you?  Use the comments section below.

Our oldest son has seen The Hobbit twice, and wants to go again.  Me?  I’d have to be paid $250 to endure such torture.  Seriously, I ran the numbers, and decided $250 is the minimum I could accept for such a thing.

I don’t watch movies with dwarves and swords.  I don’t know if The Hobbit features dwarves and swords, but it certainly does in spirit, if not in fact. What are your feelings on that film?  Would you go for less than $250?  What’s your price? Sweet Jesus in a sidecar!

And finally, I was thinking about something a few days ago…  When I was in grade school, there was a kid named Roni (pronounced like the second half of macaroni), who wore a t-shirt to school at least twice a week.  It had a cartoon of two pigs having sex, with the words MAKIN’ BACON! below it.

I couldn’t believe he was allowed to wear such a thing, but as far as I know… nobody ever said a word to him.  In fact, he continued to wear it in Junior High the next year, with impunity.

And when I was in high school there was a hardened troublemaker hick who liked to sport a shirt with the words SUCK A ROD on the front.  It was a black t-shirt, with white iron-on letters, and he didn’t even make much of an effort to line the letters up.  It screamed “homemade,” but this guy was more into emotional terrorism and Jim Beam than aesthetics.

For our final Question (I’ve asked quite a few today, haven’t I?), I’d like to know about inappropriate t-shirts you’ve seen.  Maybe at school, or work, or wherever else it felt… not quite right.  Tell us about it in the comments.

And please don’t forget about our Amazon links this holiday season.  Here’s a good one, to get you started.  Just click-through, and shop as normal.  For most of the month we were behind last year’s numbers, but we’re now slightly ahead!  Keep it going, my friends.  It’s free to you, and means a great deal to me.  Everybody wins.