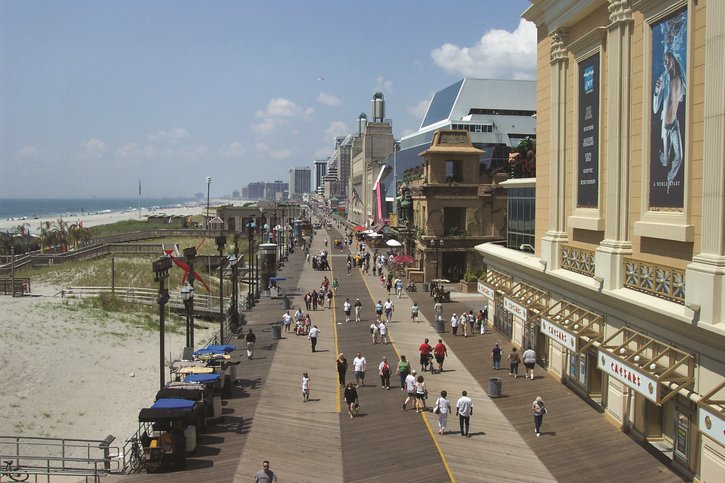 Last Saturday Toney and I drove to Atlantic City, and spent a few hours there. Neither of us had ever been, and didn’t really know what to expect. I was warned by more than one person that it’s a “shithole.” But, we had a good time.

We didn’t venture outside the tourist area, which undoubtedly helped. It was nice, and semi-rambunctious. A good vibe. There was a light dusting of drunken riff-raff on the boardwalk. I heard a couple of men shouting nonsense through their every-direction beards, and a hardened and weathered woman who could’ve been 31 or 63 asked me for money, and mumbled a string of obscenities when I told her no. But that’s OK. Who am I to pass judgment on drunken riff-raff?

The place was pandemonium, and it’s hard to imagine that area having money problems. But, it’s a short season, I know. And there are Indian casinos everywhere now, which doesn’t help. All I know is… they were raking it in last Saturday. Sweet sainted mother of Jim J. Bullock!

We had lunch at Gordon Ramsay’s Pub & Grill. It’s a fancy-pants version of a British pub, and everything was really good. And not weird. Whenever I find myself in a fancy restaurant (usually financed by an employer) I don’t recognize half of the stuff on the menu. But this was just normal pub food, “elevated,” as they say.

I had chicken pot pie, and Toney had fish and chips. She ordered a mixed drink, and I just went with iced tea. And we shared a dessert. I believe that’s everything… The final bill? $108. Good stuff.

The dessert was chocolate fondant, which meant nothing to me. What the shit is a fondant? I’d never heard that word in my life, but Toney seemed confident that it was a good choice. It took a little too long to serve, and when some unknown dude from the kitchen finally brought it out to us, I couldn’t believe my eyes.

I think it cost $11 or $14, or something along those lines. And it looked like a single Hostess cupcake in the center of a giant plate, with a tiny stainless steel container of vanilla ice cream beside it. “Seriously?” I said, as soon as the unknown dude departed. I could pop both those little things into my mouth like Tic Tacs, and we could be on our way.

But when Toney cut into the cupcake with a fork, an enormous amount of hot fudge came rolling out. It was like an optical illusion. How could there be so much of it inside such a small piece of cake? And I’m not kidding… it was one of the best things I’ve ever eaten in my life. Holy shitballs! I wish I had another one right now.

In fact, everything was good. I’m not sure it was worth $108. But, at least we didn’t come away poorer AND unsatisfied. It was all good stuff, made with recognizable ingredients. I’m glad we did it.

We didn’t do any gambling, none at all. It’s just not my thing. I have absolutely no interest in it, and neither does Toney. I’d like to spend the night down there someday soon, though. Lots of good food… the ocean… a party atmosphere… free-flowing booze… Yes, I think that would be a good time. As long as we’re not stabbed by one of those every-direction drunks mumbling and hollering on the boardwalk. A stabbing could detract from the overall experience. Right?

Speaking of drunks… They’ve been out all weekend with their explosives. It’s crazy. Last night Toney and I were sitting on the deck enjoying a few bottles of a local brew, and it sounded like the North Hollywood Bank Robbery out there.

It’s standard, of course, but it feels like it’s been cranked up a bit this year. Maybe it’s because real fireworks are now legal in West Virginia? Previously, you had to drive to South Carolina, or Tennessee (I think) to get quality recreational explosives. But now my home state has gotten in on the fun, and the border isn’t too far from here.

Here in Pennsylvania you can only buy lame-ass “emits a shower of sparks” fireworks. Or smoke bombs, or crappy things like that. Now honest-to-God bottle rockets are available right next door.

When I was a kid M-80s were easily procured through underground avenues, even though they were far from legal. In fact, I used to buy them from a cop. I’d go to his house, knock on his door, and tell him what I wanted. “How many bags?” he’d say, bored and uninterested. I think there were 25 in each bag, and he charged some small amount, like five bucks. A cop! Wonder what else he was selling on the side?

I would sometimes re-sell them for a dollar each at school, and make a killing. And guys used to set them off INSIDE the high school. Heh. Can you imagine if something like that happened today? It would make the national news.

I remember somebody taking a cigarette, ripping off the filter, and sliding it onto the fuse of an M-80. Then they lit the cig, and it took about ten minutes for it to burn down. So, the explosion didn’t happen until everybody was sitting quietly in class. It sounded like an atom bomb went off in there. Insanity!

And they’ll go off under water too, so people used to flush them down toilets, etc.

There was an abandoned house in Dunbar, with all the windows knocked out, and we used to light M-80s and skyhook them inside. When one went off, there was a bright flash in every window on the first floor. And we’d laugh and laugh. It’s a good thing we didn’t burn the place down. Yikes! When I think back on some of the dumbass shit we did…

One of the funniest things I ever saw in my life involved fireworks. It happened while I was working at the Dunbar Exxon, with a group of hardened rednecks. There was a giant fat guy who loitered there all the time, and ate snacks he never paid for. Everybody called him Meatball, which he accepted with no objection.

He went into the men’s room one night, which was roughly the size of a phone booth, for his evening dump (his PM BM). There was only a toilet in there, and a sink. And one of the resident hillbillies produced a handful of bottle rockets, and lined four or five of them up on the floor. Then he lit them, and kicked them under the bathroom door.

Meatball began howling as those things ricocheted around inside the tiny room. Then they started exploding, and the door flung open. He emerged from a rolling cloud of smoke, coughing and cursing, with his enormous pants twisted a quarter-turn. I’m not kidding, I thought my lungs were going to collapse from laughter.

And I think I’ll end it right there. If you have any comments or opinions about Atlantic City and/or the Gordon Ramsay Pub, please share ’em in the comments. I’d also like to read your fireworks stories, if you have any good ones. I have a bunch more (we were hooligans), but I’m going to call it a day here.

Thank you guys for reading. I hope you’ve had a great holiday.