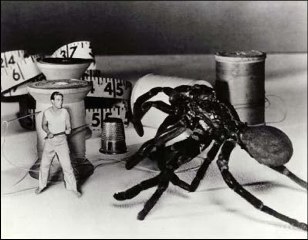 I’m confused.  For all my life the cool and with-it people have been saying that marriage is an antiquated concept — a mossy old throwback to a time that no longer exists.  “I don’t need to go down to some government building and get a piece of paper, to prove my commitment…”  Etc.

But now it’s the cornerstone of society, the absolute pinnacle of human existence.  It’s interesting, isn’t it?  Ten years ago it meant nothing, and today it means everything.

If it were up to me, I’d legalize gay marriage right now.  I’d sign the paper without hesitation.  It wouldn’t affect me in any way, and would presumably help some people — at least make them happy.  AND everybody might shut the hell up about it, finally.  How great would that be?

For the record, I love the gays.  With the exception of a couple of scary, hardened lesbians I met in Atlanta, they’ve all been a delight.  Pass the beer nuts.

What I don’t like:  Some of their obnoxious defenders.  It’s more about them, than the cause they’re championing.  Make no mistake about it.

Anyway, I finally made it through the work week.  Some of them fly by, and others drag out like an art house film.  This one felt like it lasted for roughly a month.  But I’m now free until Sunday afternoon.

There are eight items on my To Do (NOW) list.  I have high hopes.

Yesterday I had my annual health screening at work.  The blood pressure was slightly elevated, but I’m thinking it might have had something to do with the five gallons of coffee I drank.  Man, I was vibrating like a tuning fork.

Also, I’m fat.  That’s not the way the woman put it, she said I have too much body mass.  Heh.  I said, “That sounds better than ‘you’re a fatass.'”  She laughed and said, “I wouldn’t say you’re fat, just a little heavy.”  I appreciated it.

Once again, the blood sugar and cholesterol were perfect.  I’ve got some serious good genes working on my behalf…

Another thing that confuses me:  When I was 25 I was 6 feet tall, and now I’m 5-11.  Am I shrinking?  Will I be battling spiders on the basement floor with a sewing needle in a few weeks?  I can’t have that.

Check it out:  My novel is apparently a rare collector’s item, even though it’s still available for purchase.  Can anyone explain this to me?  You can buy it brand new from Amazon for $13.95, or get a used copy for $127.35.  Again:  confused.

While I was driving yesterday, I started thinking about something that happened to me when I was about three years old.  It’s among my earliest memories.

I was in the yard, by myself.  I was digging in the dirt with a toy shovel, near our house, when I noticed some ants crawling around.  I watched them do their thing, and began thinking about one of my grandmother’s favorite sayings:  “Jeff must have ants in his pants today!”

Huh.  Ants in my pants. Wonder what that means?  I decided to conduct a little experiment.  I reached down, scooped a few of them up, and put them down the front of my pants.  And it was not good.  Almost immediately, one of them bit my wiener.  Then another!  Oww!!

I began frantically clawing at my crotch, and dancing all around the yard.  It didn’t take long to get them far away from my pee-pee (as it was then known), and everything came into focus.  I understood my grandmother’s point.  She wasn’t being literal; I just ACTED like I had ants in my pants.  Interesting.  I decided my grandmother must be some kind of literary genius, to come up with such a device.

Can you remember being a kid and totally confused by something an adult said, because you took it literally?  If so, please tell us about it.  Use the comments link below.

And here’s one final confusion to get us through the weekend…  I almost experienced a crisis this morning in the bathroom, but it was averted, thank you very much.  However, it led to a good Question, which I don’t think we’ve ever covered before.

In the comments, please tell us if you’ve ever found yourself in a situation where you had to wipe with something unusual.  Like, maybe a sock, or a curtain, or a guinea pig?  Does anything leap to mind?  If so, we’ll need to know about it.

I’m proud to say I have nothing.  But I’m hoping you guys have had more interesting experiences in the wiping realm.