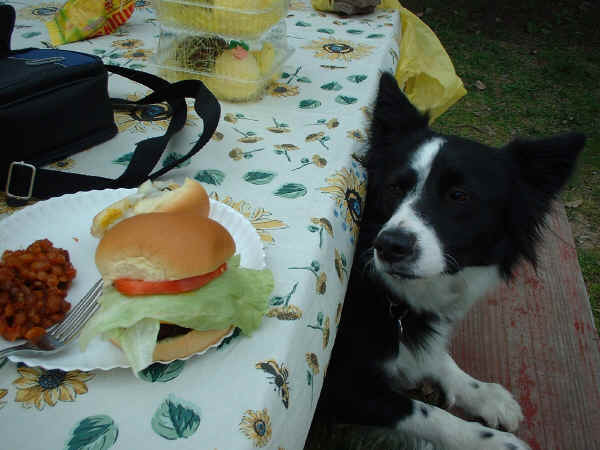 Andy’s doing a lot better. It’s been a gradual improvement, and by now I’d put him at 85% recovered. He still has a ways to go, but I think we’re out of the “dig a hole” zone for now. Whew! It was stressful and scary. But I think he’s going to be OK.

Thursday was the day we thought death was imminent. He couldn’t stand or walk, and wouldn’t eat or drink. But by Friday we’d started seeing positive signs. That night after work I carried him outside, to see if he wanted to sling some urine or just get a change of scenery. I didn’t put him on a leash… you know, since he could barely stand up.

And when I sat him down on the grass, he took off! I think he was disoriented and freaking out a bit, and just started stumble-running straight for the side hill that leads down to Half-Shirt Manor. Oh shit!

“No, Andy!!” I hollered, at 1 am. I took off running, and practically dove on top of him, right before he went over. What the hell, man?! If he’d gone down that hill, he would’ve surely broken something. He had no idea what he was doing.

And he tried to bite me a couple of times. He’s never liked to be picked up, and snapped at me once or twice — which isn’t like him. Toney said, “So what? He only has about seven teeth, and they’re all horizontal.” Ha! That’s a slight exaggeration, and also beside the point. He’s trying to bite me, of all people?! I’m the biggest Andvocate of them all.

On Saturday night he was lying in the living room floor, while Toney and I watched TV. Toney eventually went to bed, and Andy waited about ten minutes and joined her. He trotted up the stairs, and curled up on his blanket beside the bed. He couldn’t walk 48 hours prior, and was now going up stairs? It was a beautiful thing to see.

And last night we gave him some spaghetti, his favorite thing in the world. He went at it with enthusiasm, and kept it down. Toney was convinced he’d go off like a vomit cannon, and it would look like O.J. stopped by. But he maintained.

He hasn’t barked since all this started, and he still doesn’t move around much. He parks himself in a spot and remains there. But every day is better than the one before. He’s doing well, I think. Thank you guys for your concern. Andy’s good people. This episode scared the crap out of me.

On Saturday afternoon Toney and I went to this place to peruse their MASSIVE beer selection. I’d been there before, but it was Toney’s first time. Their lineup of super-obscure craft beers is insane. I know a thing or two about beer, but this place makes my brain short-out like Patrick’s.

We ended up buying a six-pack each of this and this. Both were fantastic. I had my phone out the whole time, checking the ratings at Beer Advocate. And I wasn’t the only one doing that. I don’t think there are too many people with that much knowledge stored inside their brains. Most mortals need a little assistance in such overwhelming situations.

I overheard a guy tell the owner that he’d driven there from New York State, to submerge himself in their crazy selection. The dude was walking around with the Beer Advocate app open, typing in data and possibly sporting some beer-fueled wood. That was based on the expression on his face only…

Toney and I decided I’d leave for work 30 minutes early every Friday, stop in that place on my way, and select one unknown microbrew for Saturday night. I think we’ll be able to do that, without duplication, until the late fall of 2051.

From the Cool Things desk: The younger boy and I watched this documentary about the history of National Lampoon magazine yesterday:

I loved it. It’s very well-done, and I learned a thing or two. I suspected I knew almost everything there was to know, but was mistaken. If you grew up on the Lampoon like I did, you should definitely check it out. You won’t be disappointed. We watched it on-demand for $6.99. Money well-spent.

And finally… Toney was talking to a friend yesterday who has a friend with several kids in high school, or some shit. Maybe middle school? It doesn’t really matter.

These people have reportedly told their kids they will each receive $30,000 upon graduation from high school, and can do with it whatever they want. If they’d like to put it towards college, that’s fine. Or if they want to use it as a down-payment on a house, cool. They will not interfere; it’s their money and they’re free to spend it any way they want. Travel, blow it, whatever. But there will not be another cent.

What do you think about this? I’d like to get your thoughts. What do you think about handing over $30K to a dumbass 18 year old shithead? By the way I phrased that, you can probably guess how I feel about it. I can tell you one thing… I would’ve likely ended up in Leavenworth if I’d been given such an “opportunity.”

Please let me know your feelings on this super forward-thinking plan.

And I’m going back to work! Pure awesomeness. I think it just moved.

UPDATE: Andy just barked his ass off at a Fed-Ex driver!! He’s back!