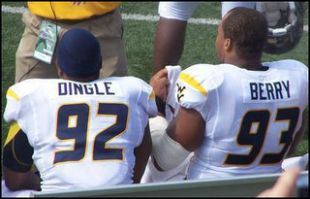 Hello Surf Reporters!  Before we get to the disturbing, gayish dream I had a few nights ago, I have to do something I hate.  I need to ask for donations again.  You know, almost every podcast I listen to, and NPR, and other websites… they all ask for Paypal donations continuously.  And there’s no hesitation whatsoever.  In fact, in the case of NPR, they try to make me feel guilty if I don’t send them a few bucks.  Forget about hesitation, they’re goddamned entitled.

I’m not entitled; I know that.  And I sincerely hate, and hesitate, to bring up this subject.  But the site requires money to operate, and during the last four years (since Warner Bros. shit me out like yesterday’s hashbrowns), it’s been more and more difficult to pull it from the general household fund.  So, if you can spare three dollars or five dollars, or any amount whatsoever, I’d be much obliged.

Here’s the Buy Jeff a Beer page, and you can also send other amounts via PayPal, to jeff@thewvsr.com.  I thank you, sincerely.  And now let’s move on to the homoerotica!

Last week Toney went to Steamtown Mall in Scranton (frequently mentioned on The Office).  And later that evening she told me about a bunch of floor-to-ceiling posters she saw inside Abercrombie & Fitch.  She said they featured what looked like 15 year old boys and girls, mostly nude, engaged in various acts of pre-sex.  In one, she said, a naked boy was pulling the jeans off a topless girl, and they looked like eighth graders.

“Disgusting!” I said.  “Let’s go down there right now, so I can witness this outrage, firsthand.”  Then she called me a perv, and we moved on to other subjects.

And that night… I had a dream in which I was working for a professional photographer, in some sort of fancy-pants studio somewhere.  It’s unclear what task I was performing, but I was definitely an employee, just kinda lingering in the shadows.  Possibly with a roll of cable across my shoulder.

The photographer was in a grouchy mood, and highly impatient with everyone.  I wanted to make sure I didn’t do anything to cross him, and felt a bit of anxiety in the dreamworld.

Then some poofter kid showed up, maybe 15 or 16 years old.  His blonde hair was feathered like something out of the 1970s, and he was continuously combing it, and admiring himself in a mirror.  He had people with him, personal assistants or whatever, and was very demanding.  I couldn’t stand the prick, from the get-go.

After he combed and primped, and whatnot, the photographer ordered him to get ready.  He told him to take off his shirt, and put on some jeans, with no underwear.

And I want to be very clear here… I was cringing and wincing during all this.  At no point was I enjoying it.  I don’t want anyone to get the wrong idea.  …Good god, what am I doing?  I shouldn’t be telling anyone this.

Anyway, the dandy emerged from his dressing room, and walked in front of the cameras, shirtless and wearing jeans.  Then the photographer told him to unbutton and unzip his pants, so a bit of pubes would be visible.  “Teenage girls like that,” he said.  And I don’t know if that’s true, or not.  All I can do is report what happened.

And here’s where everything went downhill…  The pretty boy looked uncomfortable, shifted his weight, and mumbled that he had no pubes:  they’d been manscaped into oblivion.

“What?!” the photographer screamed.  “Who told you to ‘scape?  You’ve ruined the whole shoot, a whole day’s work!!”

“Well, can’t you just Photoshop them in?” he said.

“I don’t work that way!” the photographer hollered.  “I work clean!!”

When I woke up, seconds later, my eyes flew open and I said out loud, “What the hell??”  The whole episode made me uncomfortable in my sleep, but why was I dreaming about it, to begin with?  Good god!  Who was that, Leif Garrett or someone?  I felt creepy and confused.

And now you guys can accuse me waking up fully-engorged (NOT true!), and whatever else you choose.  I know I probably would…   It’s a good thing I don’t put too much stock into the concept of “dignity.”  Right?  Holy hell.

Last weekend Toney and I were on the deck drinking a few Yuenglings, and she got up to answer her cell phone, which was on the kitchen counter.  And she stepped, barefoot, on a poopball.

Yes, the profanity went on for a good longtime.  And in between:  “I’m going to kill that dog!”

I went and found him, in the living room, and inspected his ass region.  And sure enough… a bumper crop of dingleberries.

Andy needs to be groomed, but it stresses him out so much, it’s easy to put off.  So, he had a lot of puffy hair back there, and crap dangling in it.

“Someone bring me the scissors!” I hollered, and Andy began vibrating like a lawnmower.

Toney came in there, and held the hound down.  And I cut off great clumps of fur from his butt.  He tried to wriggle away, but Toney was so mad because of the mashed poopball incident, she had him pinned-down really well.

And now his ass is nothing short of sporty.  He looks sleek, and ready for a clean dump at all times.  A few minutes after Toney released him, and he’d had enough time to regroup in the upstairs hallway, he came back into the room and licked my hand.

I think it was his way of saying, “Thank you for shaving my ass, loud food-providing man.”  I’m sorry, I’m getting a little emotional here…

Damn, this is a disgraceful update, from front to back.  I sincerely apologize.