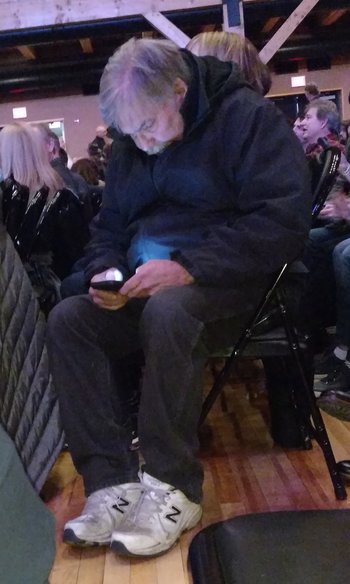 The Zombies show on Saturday night was interesting. The touring band played with the two main guys for about an hour, doing hits and rarities from their early British Invasion days, as well as a few new songs. Then there was a 20 minute intermission, and the original band came out. The four surviving members, anyway. For some reason they didn’t bring the dead one. And they played Odessey and Oracle in its entirety.

It was weird, to tell you the truth. I mean, it was great and I’m glad I saw it. But that album is such an obscure oddity, it was disconcerting to learn that actual human beings created it. The thing feels like it was captured by one of those giant radio telescopes that constantly listens for transmissions from outer space: otherworldly and mysterious. I’m not sure I was prepared to find out it was made by mere mortals.

Both incarnations of the band sounded fantastic, though. I saw a review a few days ago that said, “The Zombies, still led by original keyboard wizard Rod Argent and featuring the smoked-silk vocals of Colin Blunstone, is the best 60s band still touring which doesn’t have Mick Jagger as a front man.”

Blunstone was especially impressive. He’s thin as a knife blade, and seems almost timid onstage. Then he starts singing and it seems impossible. I wish I could do anything as well as that dude can sing. However, I didn’t much care for the extended-jam version of Argent’s “Hold Your Head Up,” and I’m not sure why they played “She’s Not There” twice. But those are only small complaints. It was a great show, and I’m glad I was on-hand to see it. The dude who brought them out referred to The Zombies as ‘rock ‘n’ roll royalty,’ and I certainly wouldn’t argue with that.

By the way… the man in the picture was sitting across the aisle from me. I snapped it moments before the show started. Yes, it was a youthful, raucous crowd. Very reminiscent of the time I saw Fugazi in Atlanta. My son and I were lucky to make it out of there alive on Saturday night.

I was looking at the acts who will be performing at the same venue soon. Plenty of “tribute” bands… Including Get the Led Out, Live Wire: The Ultimate AC/DC Concert Experience, and Islands In The Stream: An Afternoon with Dolly and Kenny. Have you ever seen a tribute show? I haven’t, and hopefully never will. I think I’d be so depressed I might cry. I mean, the true “ultimate” AC/DC experience would be AC/DC, right? Short of that, I’ll pass.

I saw they had Kick, an INXS tribute band there a few weeks ago. I’m not sure I’d go see the actual INXS, much less Kick (heh). And Hey Nineteen: The Steely Dan Tribute was there recently, as well. I’m starting to segue from sadness to laughter here… Is there a documentary about those kinds of bands? If not, there should be.

In the comments section, please tell us about the tribute acts you’ve seen. And feel free to justify that decision, if you must. Also, which tributes (real or imagined) would you LIKE to see? I’ll come up with a few that I wish were real, and turn it over to you guys. Let’s do it, shall we?