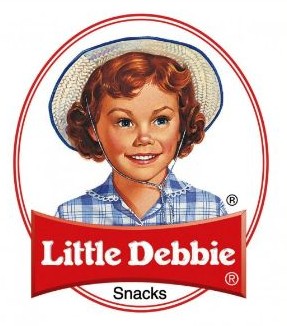 How could a grown man have a face like the Little Debbie logo?  It’s a question I cannot answer, but find myself asking from time to time.  You know, because I regularly see a dude who looks like, well… Little Debbie.  And I don’t often notice folks who resemble a corporate trademark.  Ya know?

While I was at Wendy’s today I also saw a guy with air hockey pucks in his earlobes.  And an elderly lesbian with a buzzcut, eating fries while standing at the counter.  I don’t have a problem with the elderly lesbian part, but man, I hate it when people eat fries before they get to their table.  You seriously can’t wait one more minute?  Pigs.

I also don’t like it when people eat with a rhythm, if you know what I mean.  Like a machine, with an identifiable cadence.  And if the previous mouthful hasn’t been fully processed yet, it doesn’t matter.  Another bite must be introduced, because the rhythm demands it.  I’m simply not a fan.  Shake that shit up a little!

Oh, and ol’ air hockey ears?  Whatever.  If someone wants to mutilate their sound-catchers with checkers or a class ring, then good for them.  But don’t expect me to be impressed, just because you followed some idiotic trend.  Or be shocked, or outraged, or whatever reaction you’re going for.  I just think one word:  douche.

I was talking with someone about this a few days ago, and they got up on their high horse:  “Young people should be allowed to express their individuality, blah, blah, blah…”  Did I say anything about not allowing it?  No, I did not.  But I should also be allowed to render the verdict of douche.  It goes both ways.

And individuality?  Ha!  Doing the same stuff as all your friends is not exactly blazing the trail of a maverick.

It’s like those entertainers who talk about politics, in sober and earnest tones.  They act like they’re being courageous, but what’s so courageous about having the exact same paint-by-numbers opinions as everyone you know?  Just shut up and sing.

Oh yeah, and I also regularly encounter a person I’ve dubbed “Eb who says fuck too much.”  It doesn’t exactly roll off the tongue, but it’s accurate.  He looks like Eb and says fuck too much.  Fuck is like garlic, a little goes a long way.  Somebody needs to tell Eb this.

And just so you know… One of my cousins read my update a few days ago, about constipation, and said he once struggled so hard to “get one out” he ripped a handicap rail off the wall, in a public restroom.

And Steve told me his sister works with a woman who weighs roughly 350 pounds.  She was in the bathroom at work, taking a dump and lighting matches to try to mask the stink.  Something went wrong, and she caught her underwear on fire.  Then she freaked out, tripped over her pants, and fell through a section of drywall.

Also, I used to know a girl named Annette, who lived in a dumpy apartment in Atlanta.  She said she was sitting on the toilet one night, and a cockroach fell from the vent above her head.  She didn’t notice it, and the roach landed on her underwear.  When she pulled them up, she could feel something crawling around on her (Annette’s word, not mine) cooter.  She said she almost exploded a kidney trying to rip her pants and underwear off.  Heh.

And I don’t know what the hell kind of stream-of-consciousness, daisy chain of ridiculousness this update turned out to be. I don’t know whether to be happy with it, or apologize.

In any case, I hope you guys have a great weekend.  I’ll be back on Sunday or Monday.  We’ll just have to play it by ear.