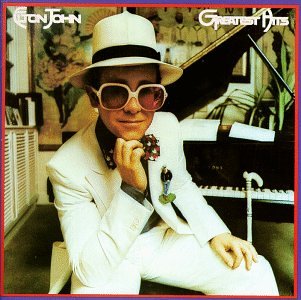 Elton John played for three hours Friday night, and that might very well be the longest show by a single performer I’ve ever seen.  And I’ve seen a lot of ’em.  Not even Bruce Springsteen remained onstage for such a length of time.  It was a real marathon.

He played all the old hits, about five songs off the new record with Leon Russell, and a few album cuts as well.  Nigel Olsson and Davey Johnstone were in the band, and those guys were around during the 1970s heyday.  It was a good time.

My only complaint:  two of the songs were dragged WAAAAY out, like some kind of acid rock jam band.  And I’m not a fan of that kinda shit.  It’s why punk happened in 1976.  The two songs were “Rocket Man” and “Madman Across the Water,” and each seemed to last for thirty minutes or more.  It was insane.  They just kept jamming and jamming and jamming…

The place sold-out in 24 hours, and the age of the audience members ranged from about 8 years old to something like 75.  I saw plenty of oldsters in there, a bunch of kids, and everything in between.  I can’t think of too many performers who could pull off such a thing.  And it wasn’t some flashy Vegas-style show, either.  It was pretty damn rock-oriented, with no frills or ridiculous theatrics.

Before the last couple of songs in the main set, security allowed the crowd to move to the edge of the stage.  Once they finished playing, the band exited and the audience started the traditional foot-stomp demand for an encore.  But Elton remained and signed autographs and shook hands.

Then he returned to his piano and played “Your Song,” and most of the crowd sang along.  I saw a guy who looked like he might’ve done a stint or two in a federal penitentiary, just belting it out.  And a woman seated to my left was wiping away tears.

It was a good time.  I’m glad I finally got to see Elton in concert.  I was a big fan when I was a kid, and am still fond of those big ‘70s hits.  It might fall under the heading of “guilty pleasure,” if I felt guilty about it.  But I don’t.  So there.

Here’s a picture from the concert, taken by somebody else, and lifted by me: 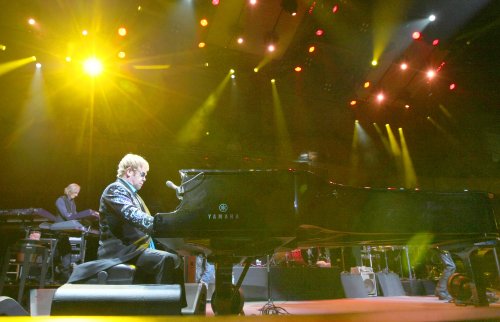 On Saturday I gave Andy a bath, and it was quite an ordeal.  I went upstairs, started running water into the tub, and he went and hid somewhere. I found him and tried to pick him up, but he ran and leaped onto Toney’s lap.  I came for him, and he (get this!) bared his teeth at me, and growled.

“You’ve got a lot of nerve, shitlips!” I told him, and snatched him under my arm.  All four of his legs were in motion, and he was flopping around like a trout on a pier.  I almost dropped him a couple of times, because of all the frantic thrashing, but I finally wrestled his big ass into the bathtub.

He was shaking in absolute fright (every time!), and I started scrubbing him down.  He never moved during this part of the process.  He just stood there, staring straight ahead, like some kind of vibrating ceramic statue.  At one point it started smelling like fish in there, and I’m fairly certain he compressed his sac.

Eventually I got him washed and rinsed, and let the water out.  I asked the younger youngling to hand me a towel, and began drying him off.  I’d only started when Andy ROCKETED from the tub, and did a series of those big dog shakes in the middle of the bathroom.  I think there was water in the ceiling light when he was finished.

I tried to grab him, but he was having none of it, so we just opened the door and set him free.  He spent the next ten minutes running from room to room, and rubbing himself on the furniture.  Toney was screaming in protest, but the hound would not be denied.

My son and I were soaked and laughing, the bathroom was completely covered in water and fur, and most of the house was now wet as well.  It was crazy, but long overdue.  Ol’ Blacklips had started to smell like the goat pen at a petting zoo.

Before I get to the Questions of the Day, I need to ask you guys for a favor.  If you ordered a signed copy of Crossroads Road, I’d appreciate it if you could send a quick email, and tell me how you would like it personalized.  The PayPal special instructions option didn’t work very well, so this might do the trick.  You can also confirm your mailing address, and include whatever else you want me to know.

Please send the info to thewvsr@gmail.com That’s an address I don’t use often, so it’ll be easy to organize.  I’m going to complete this project within the next few days, so your books should be arriving soon.  Thanks, folks!

Oh, and if I don’t have any direction from you, I’d rather not guess and use the PayPal account name.  In that case I’ll probably just sign the book, without a personalization.  OK?  OK.

And now for the Questions…  At the concert on Friday, I saw a woman nearly fall out of the upper deck.  She was probably 55 years old and was a person of substantial heft, attempting to step over a seat and get into the front row.  But the chair folded up, she stumbled forward, and very nearly went over the railing.  I mean, she was up on top, a-teetering.

For some reason I was sitting there watching all this transpire from afar, and yelled, “Oh shit!” when tragedy nearly struck.  It was a long way down, and I don’t think there would’ve been a happy ending if she’d gone over.  It gives me a full-body shiver, every time I think about it.

And I’d like to know if you’ve ever seen someone get hurt in a stadium or arena setting.  Two stories jump immediately to my mind…

At a Queen concert, a hundred years ago, a cop came strutting through, giving everybody the “you better watch your step” stink-eye, and promptly fell down a flight of stairs.  Needless to say, the entire section erupted in sustained laughter and taunts.  The cop landed in a heap at the bottom, got up, dusted himself off, and continued on his way.

And one of my aunts was at a high school football game, and fell through the bleachers.  She was climbing to the top, and one of the boards said fukkit.  She plunged all the way through, and exploded her forearm across a bar, on her way down.  It messed her up pretty bad, and I think she had to have surgery.  But I can’t help laughing.  I mean, seriously.

So, there you go.  If you have any stories about people getting hurt in an arena of some sort, please tell us about it.

And if you’d like to tell us about any especially lengthy concerts you’ve attended… that’s cool, too.