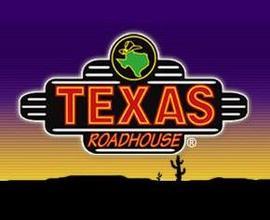 I’m still having technical issues here, but won’t go into it today.  I’ll spare you.  But I think you should know that I’ve officially reached the hand-thru-the-hair stage.  That threshold was achieved this morning, around 2:20 am.

Anyway, the younger Secret has a birthday this week.  He’s turning 11, and on Saturday Toney told him he could pick a restaurant and we’d go there for dinner that night.

He said he wanted to go to Texas Roadhouse, which sounded good to me.  It beats Ret Lopster, which is the way he usually goes with it.  Both boys enjoy the novelty of using tools to dismantle creatures from the ocean floor, but I’m not much for the crustaceans.  Never have been.

So, we went to the restaurant around 5:30 on Saturday, and it was complete pandemonium.  The parking lot was full of cars, and people were standing outside with vibra-boxes in their hands.  Grrr…  I thought the economy was in a shambles?

I wedged my heft through the crowd inside the front door, and one of the three(!) hostesses told me it would be at least a 35 minute wait.  I told her to give me one of them boxes, dammit, and we’d be standing outside.  Incredible.  At one point I think I had ugly strangers pressed against me on all four sides of my body.  And I can’t have that.

Of course, they were playing shitkicker music in that place.  You know, because the word “Texas” appears in their name.  But Pantera was from Texas, as were the Toadies and the Butthole Surfers.  I would’ve much preferred some Butthole Surfers, if you want to know the truth.

And to make matters worse, their CD player kept skipping.  The volume was blasting, and the songs kept getting stuck:  “I think my son is a faaaaaag, because he drives a Toyota, ota, ota, ota, ota…”  And they’d let it go for a long, long time before they’d correct the problem.  Then it would happen again.

Toney stayed inside the holding pen, but it was too claustrophobic for me.  It was a little cold outside, but the Secrets and I waited on the sidewalk and looked for “celebrities.”

Do you ever do this?  We like to spot movie stars and famous musicians, amongst the general public.  On Saturday night we saw “Jerry Seinfeld,” and “George Lucas.”  They were also standing outside, with vibra-boxes.

Finally, we were summoned — almost exactly an hour after I’d been told it would be 35 minutes.  And some chick with a BB stuck to the side of her nose led us to a table inside the bar area.

And the noise level in that place was amazing; I’ve been to Major League baseball games that were quieter.  It was just a sustained din, making it nearly impossible to have a conversation.

Our waiter spoke in a voice completely devoid of inflection, and I had trouble understanding him inside that maelstrom of high-volume.  At one point he asked what I wanted on my baked potato, and I answered, “Yes.”

But once we were finally seated, and had successfully conveyed our orders to the robo-waiter, everything went from irritating and unbelievable, to fantastic.  I got a beer the size of an umbrella stand (Yuengling Lager), and the food was nothing short of excellent.

What’s your opinion of Texas Roadhouse?  Have you been to one?  I’m no expert, that was only my third or fourth visit, but I think it’s better than it has a right to be.  You know, for big-ass mega-chains.

And I’m sure we’ve been through this multiple times, but in the comments please tell us your favorite chain restaurants.  Everybody likes to trash ’em, but what are some good ones, in your opinion?  And I’m talking about national, or well-known regional chains — not Jim’s World of Curved Sausage in Montana, or whatever.

I’ve been ordered to work thirty minutes early, so I’m going to have to cut this one short.  Here’s an especially funny Mockable from Metten, to take up the slack.