How are you guys doing? Good, I hope. Me? Thanks for asking! I’m doing OK. There’s not a moment of the day or night when I couldn’t go for a little more food and/or sleep. But that’s standard. Other than that, things are going reasonably well.

On Sunday I spent most of the day working in the yard: mowin’, whackin’, and trimmin’. The good news is that it was probably the last time in 2015. At least until I have to deal with the metric shitload of leaves that are already threatening me with their vibrant colors. I was out there shaking my fist at them, and yelling “Stay right where you are, motherfuckers!” But I’m not convinced that’ll make much of a difference.

And Andy’s doing great. He’s back at 100%. In fact, he might be at 120%. I think his near-death experience has reinvigorated ol’ Black Lips. He’s swinging for the fences! I love it. That episode scared the crap out of me. But he’s back from the light.

Today I’m going to briefly tell you about four things that caught and held my attention this past weekend. Then I’ll hand it over to you guys to do with it what you will.

When I was in Jr. High I watched an HBO stand-up special with Phyllis Diller. I didn’t go into it with high hopes, because I only knew her from game shows and that kind of thing. But it killed me. At one point she launched into a lengthy segment made up of nothing but one-liners about a fictitious fat woman, which I thought was the absolute pinnacle of genius.

For some reason I was thinking about it a couple of days ago, and, of course, it’s on YouTube… Everything’s on YouTube. And it’s still great. There are definitely some clinkers, but the good ones are really good. Can you imagine if some non-fat comedian devoted six minutes of their act to fat jokes nowadays? They’d probably burn the club down. Whatever. I love it. It’s been almost 40 years, and it still sticks out in my mind as one of the biggest and hardest laughs of my life. 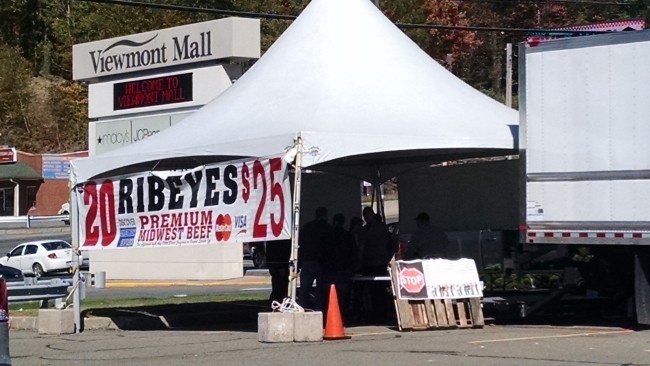 Yesterday I drove past the mall, and heard a man hollering through a bullhorn or some similar amplification device. When I reluctantly swiveled my head (wotta hassle!) I saw this set-up in the parking lot. Somebody was selling meat out of the back of a panel truck! And check out the banner: 20 ribeyes for $25. Heh. I whipped the wheel to the right, parked, and snapped a few pictures. But I wouldn’t go into that tent, because I knew I’d be hit with a tsunami of hard-sell, and possibly raped. And I can’t have that.

Do any of you have additional information on this kind of thing? How big are those “ribeyes?” I’m thinking they’re roughly the size of silver dollars. Am I right? What do you know about it? Is it the modern-day version of those guys who used to try to sell us stereo speakers in parking lots? Help me out, won’t you? 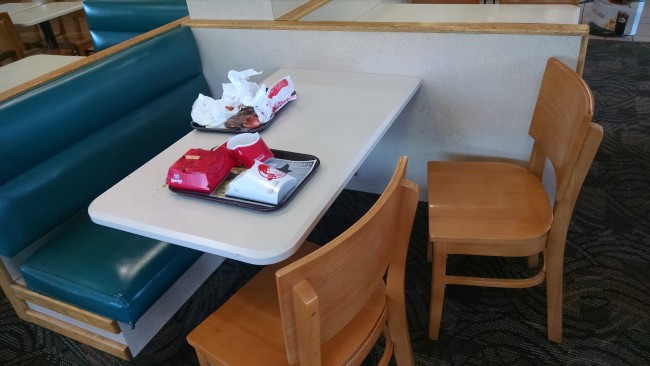 And I’ve mentioned this before, but there are few things that get my blood boiling more than people who walk away from their fast food trash. Last time I talked about this I was astonished (ASTONISHED!) that a few of you disagreed. Wow! Just look at that photo from Wendy’s on Saturday. Two assholes had been sitting there, with matching goatees and arrogant smirks, and when they were done… they just strolled on out the door. Somebody else can deal with their mess, somebody lower than them. In a fast food joint you’re supposed to throw away your trash. Society has decided this. It’s the same as people who leave their shopping carts wherever they’ve been rendered no-longer-useful. Massive… gaping assholes! 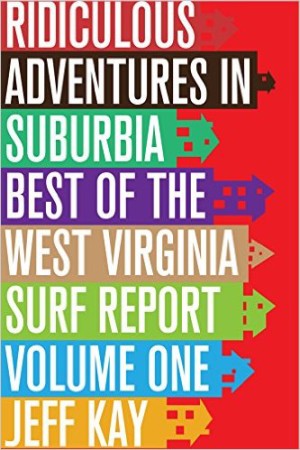 Finally, the first volume of the Surf Report archives is now live in the Kindle Store. Just click on the image to the right, and you’ll be taken there, as if by magic. It’s not just a copy and paste of the archives, it’s been edited down to only the good stuff. In my estimation, anyway.

For you contrarians who refuse to submit to our Amazon overlords, it’s also available at Kobo, and soon at Barnes & Noble. Not sure what’s going on with B&N… It still says “processing.” But, I can only assume it’ll be up there sometime today, and ready for download to your Nook.

I’m working on the paperback version, but it’s quite involved. It might be two weeks before that goes live. But, I’m planning to do one. Stay tuned on that.

Some trivia on this thing: the cover was done by a woman in Pakistan, the formatting was done by a husband/wife team in Australia, and the words were written by a big goofy dumbass in the good ol’ US of A. This shit is international.

And I’m going to work now. I hope you guys have yourselves a fine, fine day.