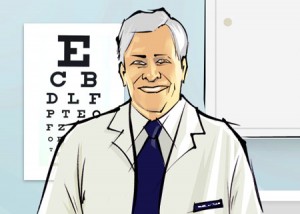 I showed up for yesterday’s eye appointment ten minutes early, and was given a clipboard with a form attached.  “Please have a seat and fill that out… both sides,” the woman in inexplicable hospital scrubs instructed.  “And take it to the exam room with you.”

It asked for my name, home address, social security number (why??), telephone numbers, etc.  Then there was a long list of ailments, and I was supposed to check the ones I “suffer.”

The first few were understandable (heart disease, diabetes, asthma), but then it got weird.  They wanted to know if I suffer from “surgery.”  I don’t get it.  And they also asked if I suffer from “alcohol use.”  Most assuredly not!

I checked the NO box all the way down, and signed the back of the form.  Below the signature box it asked if I give them permission to leave messages on my answering machine.  Just any kind of messages?  I’d like to restrict it to relevant subjects, and not just three minutes of fart sounds, or whatever.  But they didn’t provide a space where I could write all that, so I just checked YES.

Another woman in scrubs (are they performing surgeries back there??) called my name, and took me to a small room.  I was told to put my chin in a stirrup, and she shot a blast of air into each of my eyes.  Said she was checking my “pressure,” whatever that means.

After a few more questions, she led me to an exam room and said the doctor would be there shortly.  I took out my phone and started monkeying around on the internet for a few minutes, and the dude finally arrived.  He shook my hand like we were old friends reuniting, and said, “How ya been, man?”

Man?  What’s the story with super-casual eye doctors?  I’ve had several in my life, including one in California who used a lot of profanity.  Needless to say that kind of thing doesn’t offend me, but the setting and the circumstances made it feel a bit odd.  You don’t really expect a doctor to use words like “shitty” during an examination.  Ya know?

But the guy yesterday wasn’t cussing, he just acted like we were buddies.  Probably just his style…  No big deal.

He put the big apparatus in front of my face, and began flicking lenses and asking if each improved my vision any.  He was very friendly and nice, and I felt a little guilty about the three years that have passed since I last visited his office.  But he didn’t lecture me about it.

“Do you have time for me to dilate your pupils?” he asked near the end.

“It’s been a while,” he interrupted.  “And I’d feel better if I did a thorough examination.”

Whatever… man.  He put two drops into each of my eyes, and told me to go to a holding area down the hall, to give the drops time to work their magic.

And I sat out there for an hour twenty minutes.

While I waited, I could hear a kid screaming bloody murder inside one of the exam rooms.  Just shrieking with complete unbridled gusto…  Good god.

Then a door to one of the other rooms opened, near where I was sitting, and the doctor told a very old woman that she doesn’t need glasses.  “Your vision is fine,” he said.  “No it isn’t!” she hollered.  And he just chuckled and extracted himself from the situation.

The woman had a handler with her, a girl in her early twenties.  The girl tried to get the old lady from the exam chair to a wheelchair.  “I can’t see the wheelchair!!” the old woman screamed, and the girl, now fully exasperated, said, “It’s sitting right in front of you.”  “But I’m not looking in that direction, you idiot!” the old lady shouted.

What a nasty old bag…  I can’t wait until I can get away with acting that way.  It’ll be kick-ass!

Many people entered and left the holding area while I was there, but my name was never called.  I was there forever, and kept looking at my wrist with irritation, even though I wasn’t wearing a watch.  Finally, at the seventy minute mark, I found one of the scrub nurses.

“I’ve been waiting for an hour and ten minutes.  He didn’t forget about me, did he?” I asked in a good-natured way.

“An hour and ten minutes?” the woman answered, sarcastically, as if she didn’t believe me.

“What time did you come out of the exam room?”

“An hour and ten minutes ago,” I said.

“Well, he certainly didn’t forget about you.  Just have a seat, and your name will be called when it’s your turn,” she said, as if addressing a large retarded boy.  A large retarded boy who was trying to jump the queue.

When I sat down, an older man seated nearby laughed and said, “Those drops are going to wear off.  They might have to start over.”  And I just shook my head with sadness.

About ten minutes later, the doc came out and called my name.  Then he began apologizing for the wait.  “The woman in front of you is a good friend of my parents, and she just loves to talk.  I’m sorry it took so long, but I couldn’t be rude to her.”

What the hell??  I told him I needed to go to work, and he made me wait for eighty minutes while he chitchatted?  Man, that really steams my carrots…

He finished the exam in roughly three minutes, and told me everything looked good.  But it might be a full week before my replacement lenses arrive.  A week?!  But I can’t see anything!  I’m living in a fuzzy wuzzy world here, I shouted.  “They have to be manufactured,” he shrugged, and expertly extracted himself from the situation.

My eyes were still dilated, and it wasn’t easy driving home.  I had to squint like Gilbert Gottfried, and it was still rough-going.  I was afraid I might crash into someone, ’cause it was just colors and abstract shapes in front of me.

But I made it without killing anyone.  I stumbled into the house and grabbed my lunch and iPod, and told the younger Secret I was going to work.  Shit… this was sucking.  I wasn’t looking forward to a forty mile drive, with my pupils the size of dimes.  Way too much light…

It was dusk at this point, and as I merged onto I-81 it looked like a kaleidoscope.  Holy crap!  I stayed to the right, and started muttering amateur prayers.

The guy on the radio reminded me that a large snowstorm was also about to hammer us, starting between seven and eight o’clock.  It just kept getting better and better…

I made it about ten miles on 81, before I said fukkit.  I couldn’t see a damn thing, and wouldn’t be able to see my computer screen after I arrived.  What was I doing??  So, I called my boss and asked if I could just take the night off.

“Yeah, that’s cool,” he said.  “Half the employees called-off because of the storm, so there’s nothing going on.”

So, I went to the beer store, returned home, put on a giant pair of sweatpants and had a pleasant evening in front o’ the television with Toney.  At first I was having trouble looking at the Big Ass TV, but everything leveled-out, and we watched a Ricky Gervais special on HBO.  Then, after Toney went to bed, I watched The Hammer with Adam Carolla.

It was much better than going to work, if you want to know the truth.  So much better.  But it’s the first time in more than two years that I haven’t reported to work.  I NEVER call-off, not ever.  So, there was a certain amount of guilt.

Oh well.  I’m going back today, and they can give the ol’ ball vise an extra half-turn to make me pay for my sins.  And I will be absolved.