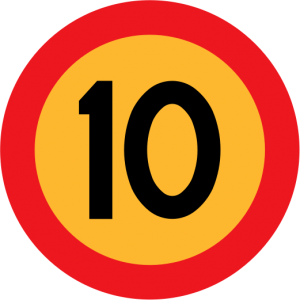 It’s not exactly hard science, but one of the web stats programs I use tells me that sometime last week (I don’t monitor it very closely anymore) this site welcomed its 10 millionth unique visitor.  And that’s pretty cool.

I started using Sitemeter in the early days, but not every page is tracked.  In the old FrontPage era I had to install the code on each page, by hand, and wasn’t consistent with it.  Plus, the program has been criticized because it counts visits from Google and Yahoo, and all the search engine spiders.

Regardless…  We passed 10 million visitors, and have served more than 20 million page views — according to Sitemeter.  And that’s not too shabby, I think.  I’m not satisfied, mind you, but celebrate the highly flawed milestone anyway.

I used to be obsessed with the stats, and would check them multiple times per hour.  Now I hardly ever look.  Occasionally I’ll take a quick peak to see if anything unusual is going on, but don’t even check them once a day at this point.  The five year ago me probably wouldn’t even recognize the today me.  For better or worse.

Yesterday I logged into Google Analytics, which many people consider to be the gold standard of free stats programs.  It’s pretty kick-ass, and will tell you just about anything you want to know — if you can just figure out how to ask.  There’s so much going on, it can be confusing.  They also back out all the spider visits and that kind of boolshit, and present a different picture than Sitemeter.  Let’s just say that Sitemeter is better for the ego…

But when I went there, I noticed they are now offering ‘real time’ information.  This is new.  You can actually sit and watch as visitors enter and leave your website.  You can see where they go, from one page to another, and find out how they got there and what words they typed into search engines, etc.  And down at the bottom of the page there’s a world map, which displays where your current visitors are located.  Dots appear and disappear, and it’s freaking cool.

The whole thing is crazy, and I probably would have lost my job if it was available during my days of stats obsession.  I would’ve sat there looking at the big number at the top of the page, the always-changing one that tells you how many visitors are on your site RIGHT NOW.  And my heart would have ached a little every time someone left, and soared whenever a new person arrived.  Heh.  Thankfully, everything was fairly primitive back then; you still had to hit refresh, ‘n’ shit.

And speaking of the site, I put together a new page that collects all our fast food shenanigans in one spot.  It was long overdue, and you can see it here.  Eventually I’m going to add it to the navigation bar, in place of “resources.”   Also, I’m planning to start posting Ads vs. Reality photos again.  I’m going to shoot for a new comparison every Friday, starting this week.  It’s still a popular page, and I shouldn’t have neglected it.

Same goes for the Smoking Fish photos…  I have tons that I never posted.  It’s horrible, and I don’t even want to think about it.  I will get them caught up very soon, though.  I apologize, sincerely.  If they had a Mount Rushmore of lameness, my tiny Duke head would be up there.  No doubt.

Over the past couple of years I’ve put most of my efforts into the book projects, and the site has suffered.  Sure, I still update most days, but feel like it’s missing some of the crazy energy of the past. I used to live and breathe this site, and generate crackpot ideas on a daily basis.  I miss that.

In fact… for no discernible reason, I’ve been feeling it again.  Over the past few weeks I’ve been extra-enthusiastic about the Surf Report, and making plans for it.  I want it to be unpredictable and ridiculous again.  No more coasting.

A while ago I was conversing with a guy who works as a consultant, charging ridiculous fees to help corporations and hyper-motivated individuals build an effective “web presence.”  This stuff is way outside my scope, but he made a casual offer to do a quick analysis of TheWVSR, if I wanted.

I put it out of my mind for a while, but finally decided to take him up on it.  I had to set up a phone call through his assistant, and it was scheduled for two weeks in the future.  And last week we talked for a half-hour about this website.  He charges $5000 an hour, so it was $2500 worth of free insight.

And it was a positive experience.  He gave me a little grief (about my shitty networking skills, for instance), but mostly had good things to say.  He was impressed by a lot of stuff, and said the fundamentals are in place.  I won’t tell you all the things he said, because they’re technical and boring, but I came away from it feeling enthused.  The infrastructure is sound, and only requires good ideas and sustained energy to make it special.

Please don’t think I want to turn the Surf Report into a corporate site, or anything like that.  I only spoke with the consultant dude because he offered, and I was curious what he might recommend.  Turns out I need to be better at answering my email, building relationships, and writing focused updates a couple of times each week.  I can still be all over the place sometimes, but not constantly.

Even before we spoke I’d started writing more focused things, like the sitcom piece, and Explanations for Aliens.  So, my good instincts might not be completely gone, after all…

I hope this update hasn’t been too boring for you guys. I’m getting all reflective after I saw that 10 million number…  Plus, I’m feeling a powerful urge to devote my energies to the site again.  It’s been semi-neglected for too long.

I’ll be back tomorrow, with something that’s hopefully funny.  Wouldn’t that be a novelty?